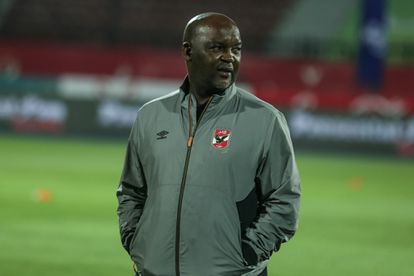 Al Ahly coach Pitso Mosimane is at it again with his mind games, claiming that Mamelodi Sundowns had better preparations than his team.

Speaking ahead of Saturday’s CAF Champions League clash between the two African giants, Mosimane said Al Ahly have had it tough in the past eight days or so compared to Sundowns.

He lamented playing Al Merrikh in the CAF Champions League, Pyramids in the league and having to travel for over 10 hours to South Africa to face Sundowns.

Mosimane further revealed that he didn’t want to rest some of his regulars for the Pyramids game which Al Ahly won 3-0 because it was a top-of-the-table clash which they needed to win at all costs.

“Our preparations haven’t been very easy. I think you know that we came from playing Al Merrikh and within three days we had to play Pyramids, and that was a top of the table game,” Mosimane told the media on Friday.

“We had to put everyone in the line-up because we wanted to win, but in comparison to our opponents… I don’t even know who they played in the Nedbank Cup, I don’t know the name of the team,” said Mosimane.

Mosimane took a jab at Sundowns, claiming that they had it easy in midweek when they played Mathaithai FC in the Nedbank Cup.

The 57-year-old mentor said he didn’t even know Mathaithai but warned that he wasn’t making any excuses for Al Ahly ahead of this important clash.

“We are in a difficult situation of three games in about eight or nine days. It’s not just that – we have to fly for 10 hours to come here, travelling from Cairo at 2am to refill in Aswan in Egypt and leave at 4am to land here but we are not complaining about preparation. It could have been better,” said Mosimane.

“Sundowns had better preparations, they were in Cairo for seven days, no issues but that’s not an excuse. It is the way it is, and I would have done the same if I was at Sundowns to be honest, it’s fair,” added Mosimane.