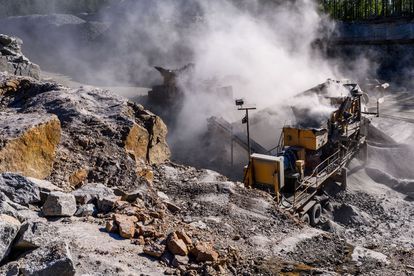 The 87 suspects appeared before the Stilfontein Regional Court on Friday after they were arrested at shaft 2 in Orkney. Photo: Pexels

The 87 suspects appeared before the Stilfontein Regional Court on Friday after they were arrested at shaft 2 in Orkney. Photo: Pexels

The case against 87 suspected illegal miners, ‘zama-zamas’ in the North West has been postponed to 6 July 2022 for pre-trial conferencing.

The 87 suspects appeared before the Stilfontein Regional Court on Friday after they were arrested at shaft 2 in Orkney.

The state and the defence attorney are expected to exchange all the necessary documents and resolve other pending matters in preparation for trial, and subsequently, a trial date will be decided upon, said North West National Prosecuting Authority spokesperson, Henry Mamothame.

“All the accused are in police custody, after they abandoned bail, owing to their illegal status in South Africa,”

He added that the ‘zama-zamas’ are charged with six counts of murder, robbery with aggravating circumstances, conspiracy to commit robbery, illegal mining, possession of automatic firearms, attempted murder and contravening the immigration act.

‘ZAMA-ZAMAS’ DIE IN SHOOTOUT WITH POLICE

Furthermore, police reports indicate that eight of the accused were wounded and another six were shot dead. This was during a shootout with members of the Special Task Force, assisted by Hawks Organised Crime in the North West, during an intelligence-driven operation on Wednesday 20 October 2021.

“The eight injured have since been discharged from the hospital, and are now in police custody. Following the shootout, Police discovered, two mini-busses, illegal mining paraphernalia, gold-bearing material, and eleven Illegal firearms (3 x shotguns, 3 x rifles, 4 x pistols and 1 x revolver) and bags of food,”

The ‘zama-zamas’ will remain in police custody until the matter is finalised.

TWO ACCUSED WERE CONVICTED FOR POSSESSION OF EXPLOSIVES

Meanwhile, in Rustenburg, Noah Sithole (62) was convicted by the Regional Court for possession of explosives.

On 18 June 2020, police officers from Phokeng K9 followed up on information and made their way to a house in Motlhabeng Section in Kanana village where Sithole was found in possession of explosives.

“The matter was handed over to the Hawks’ Serious Organised Crime investigation for further probing. The accused made a series of court appearances until he was found guilty and sentenced to eight years imprisonment of which three were suspended for five years. He will therefore serve an effective five years jail term,”

In a separate incident, Nkopane Malia (38) was convicted by the Klerksdorp Magistrate’s Court after being arrested by the Serious Organised Crime Investigation in Klerksdorp on 12 July 2021 for possession of a .38 Special revolver and cartridges.