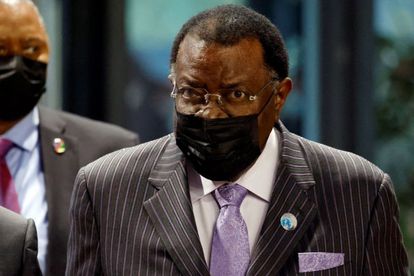 Namibian President Hage Geingob’s office has officially rejected allegations that he did a “favour” for his South African counterpart, Cyril Ramaphosa by helping him track down the suspects who allegedly stole millions of his Limpopo farm.

Former spy boss Arthur Fraser laid criminal charges against Ramaphosa last week, claiming he concealed the theft of R62 million that had been kept on his farm in Phala-Phala. Fraser alleges that Ramaphosa reached out to Geingob and asked for his assistance in apprehending the suspects, who are all Namibian nationals.

According to Fraser, Presidential Protective Unit head Major-General Wally Rhoode then entered and exited Namibia, using unofficial channels. When they finally caught the suspects, they were apparently and interrogated, before being offered money for their silence.

The Economic Freedom Fighters (EFF), which has threatened to cause complete anarchy if Ramaphosa doesn’t step aside, had said that its Namibia branch would be filing charges against Geingob. The EFF in Namibia claims that Geingob violated that country’s sovereignty and allowed Ramaphosa’s secret agents to invade that country for his personal issues.

The Namibian Presidency says that suggestions that Geingob may have used his office to assist President Cyril Ramaphosa were motivated by malice or other ulterior motives.

When Ramaphosa addressed the National Assembly to reply to the Presidency debate, he said he had been advised to not respond to matters related to the robbery.

“In face of advice, not respond to conjecture, speculation etc, will give all matters consideration, against backdrop of advise that this matter should be ventilated in proper and appropriate forum. I repeat, the law must take its course,” he said.

He also told MPs that he has a track record of accountability and has proven that he subjects himself to accountability by Parliament and other bodies of inquiry.