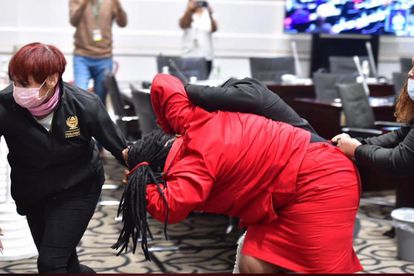 Parliament has apologised to South Africans after two days of sittings descended into chaos. Proceedings became so disorderly that Speaker Nosiviwe Mapisa-Nqakula even had to suspend the House.

Economic Freedom Fighters (EFF) MPs had to be thrown out of the Good Hope Chamber when they refused to be addressed by President Cyril Ramaphosa during the debate on his office’s budget vote on Friday.

“Through their conduct, the EFF MPs also disrupted and interfered with the rights of the rest of the Members to participate and hold the President to account regarding how his department has spent the previous budget and will implement programmes that will improve the socio-economic situation in the country, including the fight against the triple challenges of poverty, unemployment and inequality which affect the lives of many South Africans,” said Parliamentary spokesperson Moloto Mothapo.

Nosiviwe Mapisa-Nqakula has condemned the conduct of Members of Parliament, particularly those of the EFF, for their disregard of the rules, the decorum of the House and the authority of the Speaker as provided for in the Rules of the House.

Parliament says the EFF MPs, through their conduct, also disrupted and interfered with the rights of the rest of the Members to participate and hold Ramaphosa to account regarding how his department has spent the previous budget and will implement programmes that will improve the socio-economic situation in the country.

“Two parliamentary chamber protection services staff were assaulted in the process of the forceful removal of rowdy MPs from the Chamber, and are receiving medical attention. Criminal charges, which include assault and intimidation, are being opened by the staff members against the responsible EFF MPs. Parliament is providing the necessary support to these members of staff”

The party has also opened a case of assault and sexual assault against Mapisa-Nqakula after its members, including spokesperson Sinawo Thambo and Naledi Chirwa were manhandled by Parliament Protection Services.

The EFF did not want to let Ramaphosa deliver his speech on the Presidency’s Budget Vote for 2022. Those present in the chambers routinely raised points or order, before hurling insults towards the head of state and interrupting others.

The altercations pushed the start time of the president’s speech back, and the House Speaker struggled to regain control on Thursday. Resorting to drastic measures, security was called in to remove the EFF members from their seats in Parliament.