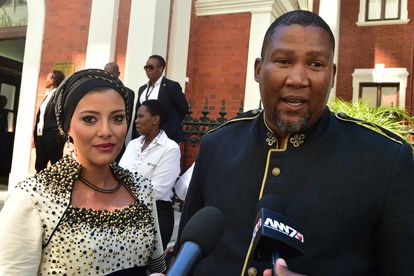 Nkosi Mandla Madela and wife Nosekeni Rabia Mandela arriving at the red carpet on Plein Street outside Parliament ahead of 2017 State of the Nation Address in Cape Town. 09/02/2017 GCIS

Nkosi Mandla Madela and wife Nosekeni Rabia Mandela arriving at the red carpet on Plein Street outside Parliament ahead of 2017 State of the Nation Address in Cape Town. 09/02/2017 GCIS

ANC MP Zwelivelile “Mandla” Mandela in a statement on Monday lambasted politicians in public office for placing their narrow interests and greed above the people they were meant to serve.

Mzansi must ponder on the road we have travelled

Commenting on the 30th anniversary of the late former President Nelson Mandela’s release from Robben Island where he was imprisoned for 27 years, he called on South Africa to “reflect and ponder on the road we have travelled and how far we have reached on the long walk to freedom”.

Citing the country’s achievement, through struggle, of freedom from “poverty; discrimination of all kinds; and freedom for each South African to achieve their true potential”, he said South Africans needed to reflect on “what must still be done”.

He said Nelson Mandela’s own words from the balcony of Cape Town City Hall on 11 February 1990 to the masses gathered on the Grand Parade and broadcast to billions around the world were significant.

“I stand here before you not as a prophet but as a humble servant of you, the people. Your tireless and heroic sacrifices have made it possible for me to be here today. I therefore place the remaining years of my life in your hands,” Nelson Mandela said.

Mandla Mandela said that South Africa lacked a “culture of service or being a servant of the people”.

“In its place we have demagogues who regard themselves as superior to the people; who regard the people as their subjects and election fodder. We need to deeply reflect on this reality.

“One of the first acts Madiba publicly announced was a cut in his Presidential salary. Today, public office bearers insist on driving the best cars, living in the most luxurious … mansions and enjoying the most opulent lifestyles. What happened to being a humble servant of the people?”

“It is no small wonder that we are faced with the pandemic of corruption for the goal is self-aggrandisement at the expense of the people,” he said.

But he also lashed out at the private sector, saying it had slim regard for the masses whom it treated as the “perpetual slaves” of those who really owned the land, the mineral wealth, industry and agriculture.

He said Nelson Mandela acknowledge that freedom and democracy was achieved on the back of the people of South Africa who had fought tirelessly and made sacrifices for freedom.

“No political office-bearer or community leader made it to high office through their own ballot or by their own efforts,” Mandla Mandela said.

Stressing the need for an active citizenry he said it was important to “revive the selfless social activism that secured Madiba’s release and set our nation on the path to democracy”.

“We can overcome all obstacles and achieve the vision of a united, free, non-racial, non-sexist and just South Africa in which all can enjoy prosperity and a better life for all,” Mandla Mandela said.