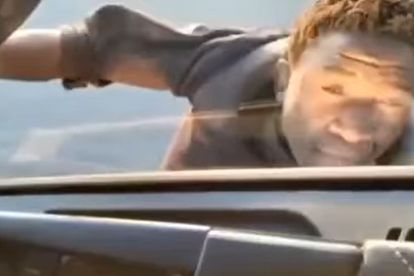 A video clip of an alleged truck hijacker dangling from the vehicle went viral on Tuesday, 13 September. Photo: Screenshot from video.

A video clip of an alleged truck hijacker dangling from the vehicle went viral on Tuesday, 13 September. Photo: Screenshot from video.

South Africans on social media have been gripped by a viral video that allegedly shows a hijacker clinging to a speeding truck after a failed attempt at taking the vehicle.

The 16-second clip, which contains strong language, was posted by a popular trucker page – SA Trucker – on Facebook and Twitter. It was also repurposed by other accounts with sizeable followings.

In the clip, the driver records the man who has an iron grip on the truck mirror and is being buffeted by the wind as the vehicle picks up speed.

The driver says, in Afrikaans, “You have to hold tight. I’ll m**r you from inside here, you want to hijack. V**tsek, you pest!” He further told the man to hold on tight because he intends to speed up.

At the end of the video, a view of WhatsApp pops up, which suggests that the clip was first posted as a status and then screen recorded. The caption read, in Afrikaans, “Look here men, oh Tata Jabu, he leaves nothing.”

On Wednesday, 14 September, another clip of the man emerged. He survived the ordeal and was shown the now-famous video by another truck driver.

The South African reached out to the Western Cape South African Police Service (SAPS) to enquire about the video and asked if any attempted hijackings have been reported in the province recently. No response was received by the time of publication.

In an unrelated incident, an alleged truck hijacking syndicate was busted in Mpumalanga on Tuesday. Five suspects were arrested.

“The five suspects are expected to appear at the Kwamhlanga magistrate’s court facing charges of being in possession of suspected stolen property and could be linked with a number of hijacking incidents as well as robberies and kidnapping incidents,” said Brigadier Selvy Mohlala.