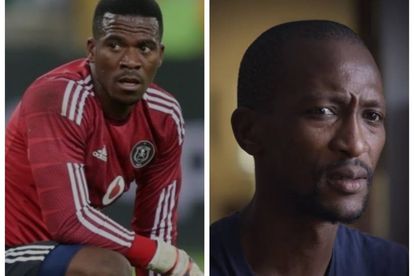 The Senzo Meyiwa trial had to be halted on Tuesday morning after journalists ‘harassed’ witness Tumelo Madlala (right). Image via Twitter @thesanews, @isolezwe

The Senzo Meyiwa trial had to be halted on Tuesday morning after journalists ‘harassed’ witness Tumelo Madlala (right). Image via Twitter @thesanews, @isolezwe

Proceedings in the murder trial of former Bafana Bafana captain, Senzo Meyiwa had to be halted on Tuesday, 13 September as State witness, Tumelo Madlala was emotional and teary on the stand.

Madlala who hails from Umlazi in KwaZulu-Natal was seemingly emotional most of the time as he gave his eyewitness account of what happened when his best friend and homeboy Senzo Meyiwa was shot at singer Kelly Khumalo’s home in Vosloorus.

According to Madlala, this is what happened the day Meyiwa was shot:

“In a blink of an eye Longwe Twala pushed the armed intruder and ran out of the house. While Longwe was out, Kelly ran away into another room and hid there. While I got up, I saw another guy in the kitchen (second intruder) and Senzo was holding his arm pressing him against the wall.

“My intention was to get out of the house and when I was there (with Senzo) I also punched the intruder on the left side of his face and a shot was fired. I then ran away to a bedroom to take refuge there, there were a lot of clothes on the bed and I hid my phone there. I also looked around trying to find a window so I could escape, however, I could not as they had burglar bars.”

The late goalkeeper’s best friend said while he and Senzo were fighting the first intruder, Kelly, Zandile and Gladness were beating the other intruder using his crutches. Asked where Meyiwa was after the gunshot, he said he didn’t know where everyone ran to.

He said after hearing the voices of the people who were in the house he then tried to open the bedroom door from inside but could not. Mthokozisi managed to open it for him using a spoon. As he came out he heard everyone calling Senzo’s name and with a shaky voice he said he saw him lying on the floor between a couch and a TV stand.

The court adjourned early to allow for Madlala to compose himself. The proceedings will resume on Wednesday, 14 September.

ALSO READ: ‘We thought they would talk’: Meyiwa family on Senzo’s friends