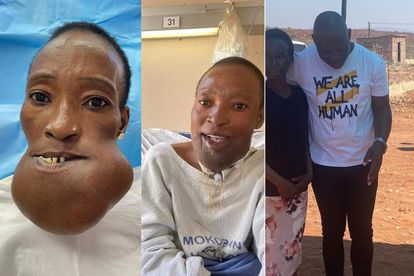 A patient who suffered from a condition called Mandibular Ameloblastoma has more reasons to smile after receiving treatment and dream home (under construction).

Meida Ramuhala suffered from Mandibular Ameloblastoma, a condition that caused the development of a tumor around her jaw.

The patient underwent surgery to remove the tumor; however, that was not all to restore her smile, the Collen Mashawana Foundation also blessed her with a commitment to build her a home.

LIMPOPO GOVERNMENT REACHES OUT FOR HELP

The Collen Mashawana Foundation committed that in the next seven to eight weeks they would have completed building a fully furnished house for Meida.

“Meida is a known patient who is a beneficiary of Rural health matters program. She suffered for sometimes with a condition called Mandibular Ameloblastoma until the MEC was approached and intervened.”

“Meida still had another challenge of a shelter of which her surgeon Dr Itani Dikgale pleaded with the MEC for intervention.

The MEC approached Collen Mashawana Foundation which didn’t hesitate and made a commitment.

MEC thanked the foundation and called upon all South African captains of industry to join hands in uplifting lives of the downtrodden.

According to the Health Department, President Ramaphosa was encouraged by the work done in taking specialist services to the deep rural areas.