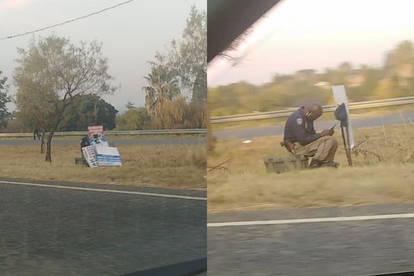 This cop decided to hide from motorist in 2021. Image via Twitter: @TrevorPapi

This cop decided to hide from motorist in 2021. Image via Twitter: @TrevorPapi

Last year was a busy one for social media as thousands of things went viral almost every day. One of those things that went viral was some snaps of a metro police officer hiding behind some boards to catch unsuspecting motorists who were breaking the law.

South African social media was undoubtedly lit for the whole of 2021. A lot of things managed to go viral, from the miracle birth of ten babies to a man trying to force a woman out of his Mercedes Benz.

Another thing that went viral for 2021 is a photo of a police officer hiding behind some cardboard while attempting to catch sneaky motorists who were breaking the law.

If one takes a quick glance, it appears that the cop is taking a little nap, but upon closer inspection, you see he is actually busy on his cellphone.

“Only in SA,” the photos were captioned by @TrevorPapi on Twitter.

Mzansians are just not impressed

The post received over 5 000 reactions from South African motorists who couldn’t believe how sneaky the cop was being. Many of them laughed out loud while others slammed his actions as unlawful.

“This is illegal they are not supposed to be hiding. If a car had to lose control and hit him they wouldn’t be held liable for any damages. F u think u smart you will end up 6 feet underground.”

“I call them Ama philistines. Because philistines used to hide from Israelites because they were their enemies. Remember Goliath was a philistine.”

“Chris Tucker did say that cops don’t go to work. They go to play. I mean, look at the guy.”