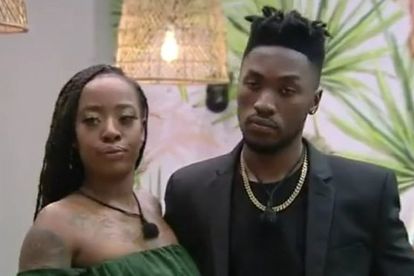 The pair met in the Big Brother house and made their relationship official when they were both evicted. However, this week it emerged that the musician is allegedly cheating on his bae with fellow amapiano musician Bontle Smith. Failing to ignore the rumours, he set the record straight on Twitter.

ALSO READ: Nothing is off-limits: #BBMzansi Housemates to tell-all on ‘Ses’fikile’

THE MUSO SETS THE RECORD STRAIGHT

Vyno took to his Twitter account on Freedom Day (27 April) to explain to his fans what the status is between him and Terry.

This follows allegations made by controversial and under fire entertainment commentator Musa Khawula who tweeted on Tuesday 26 April that the Ayoyo musician has been unfaithful.

“Vyno Miller is said to be cheating on his girlfriend Terry Treasure with Bontle Smith,” Musa wrote in a tweet.

But, in a bid to clear his name of the rumours, 25-year-old Vyno revealed that he is no longer with Terry (26). He explained that they opted to remain friends and there are no hard feelings between them, but did not mention anything about Bontle Smith.

“Ok let me clarify… in anyway I say this, it won’t come out right but I have to say my truth. I respect and care about T, but we decided to default to friendship mode We’re not beefing so please don’t make weird assumptions and narratives. I just could not ignore this anymore.”

Vyno and Terry’s steamy romance started in the Big Brother house with the pair often failing to hide their affection towards each other. This led to fans immediately “shipping” the couple and hoping that they pursue a relationship outside the show – which they did.

During her interview with Sowetan following her eviction in March, Terry gushed over Vyno as her boyfriend.

“Yes, Vyno is my boyfriend, we are in a relationship and I cannot wait to see what he and I pursue outside the house… I like how he’s very chilled and I’m extroverted, he helps me to calm down, we balance each other out,” she had said.

When the musician got evicted, a month before Terry, he spoke fondly of her in his interview with Sowetan.

“I like how spontaneous she is. I like that she speaks her mind and isn’t apologetic about living her true self… I believe Terry is a liberated and free person which I find very attractive, so her owning an account wasn’t that much of an issue,” he was quoted as saying.

‘YOU DON’T DESERVE HER’

Now that the couple is no longer together, and with Vyno confirming the news, Terry’s legion of fans has bashed him.

The Treasures, as they are called, replied bitterly to Vyno’s tweet, telling him he “did not deserve her”. Many of them felt that the relationship would not survive because of how he spoke about Terry in the house.