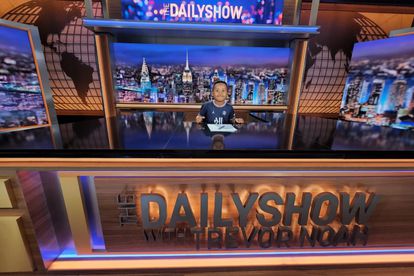 Alakhe, the son of Anele Mdoda, has South Africans green with envy of his trip to visit Trevor Noah in New York.
Image via Twitter
@anele

Alakhe, the son of Anele Mdoda, has South Africans green with envy of his trip to visit Trevor Noah in New York.
Image via Twitter
@anele

Alakhe – the son of Anele Moda – has the whole of Mzansi green with envy: the six-year-old tot has added more stamps to his passport than some of us in our lives!. He also gets to spend regular holidays with the likes of Trevor Noah and his girlfriend Minka Kelly!

There’s no forgetting his enviable collection of Formula One merchandise, his personalised Drip Footwear hook-up (he knows the big boss) as well as being invited to all the coolest kiddies’ parties in town!

After spending with Trevor Noah and the crew in Cape Town and then again in February, Alakhe got to make his own trip to the Big Apple to visit his famous uncle.

Trevor Noah and Anele Mdoda are long-time friends and often holiday together.

In New York, Alakhe had a packed itinerary where he visited a couple of tourist attractions like Times Square and Madame Tussauds wax gallery.

The grade one pupil got to kick around a soccer ball with Trevor Noah and enjoy what the nightlife has to offer too!

He even scored an invite to The Daily Show where he mingled with the likes of guests like Burna Boy.

And if that’s not enough, he even got to sit in the host’s seat – watch out Trevor Noah, you may have competition!

Whilst in New York, Alakhe also got to meet another talk show legend – “Grandma Felicia”

Apart from being a primary school learner, Alakhe is also a seasoned YouTuber with his own channel called Alakhe’s World.

And the apple doesn’t fall far from the tree; Alakhe has the charm, wit, and sense of humour just like mom Anele!

With videos of him giving commentary on F1, baking kid-friendly treats, and playing with the coolest video games, Alakhe’s videos are always a laugh!