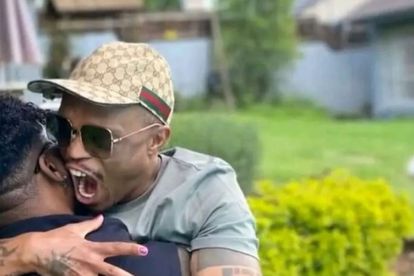 South African media personality Somizi Mhlongo is doing his bit to make the world a better place. The Idols SA judge recently headed online to share that he is giving away free hugs to anyone who needs it. The star’s gesture comes during a time when many South Africans are focused on mental health issues and depression.

The kind gesture has been met with kind words from his ample fans who commended him for trying to make a difference – albeit a small one.

Somizi wants to hug you better!

His death has sparked thousands of posts regarding mental health from social media users and celebrities who have expressed how important it is to be kind and caring towards other people.

One person who is trying to make a positive difference is seasoned choreographer, radio and TV personality, and reality TV star, Somizi.

On Wednesday 2 March, the 49-year-old offered to give anyone who needs it a free hug in light of spreading love and kindness.

“Tomorrow I’m giving hugs to anyone who bumps into me and needs it,” he captioned his post.

According to Somgaga, he was wondering how he could spread a little love and positivity, and then he got the idea to give away free hugs from TikTok.

The post received a number of comments who welcomed Somizi’s idea to lighten up South Africa. Many of them remarked that they wouldn’t mind a free hug.

“I’m in dire need of one but geography things shame😞😞😞 but at this point, I can even settle for an air hug or internet hug. That’s how badly I need one.”

“So sweet of you ❣ God bless you for your beautiful heart🤗❤🤗”