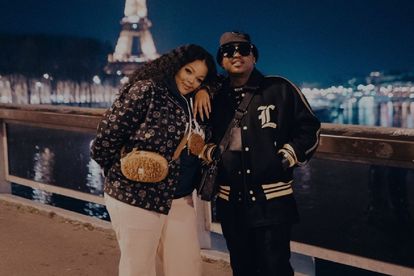 Amapiano couple DBN Gogo and Focalistic are getting their #CoupleGoals on in Paris! Image via @bdngogo/Instagram

Amapiano couple DBN Gogo and Focalistic are getting their #CoupleGoals on in Paris! Image via @bdngogo/Instagram

When amapiano DJ and producer DBN Gogo revealed to her fans last month who her mystery man is, the Twitter streets went into overdrive. As part of the big reveal, the Khuza Gogo hitmaker and now confirmed bae, Focalistic (who is an amapiano musician and rapper), shared their Valentine’s Day on social media.

This was evident in the social media posts that DBN Gogo shared, displaying all the lavish gifts her man had spoilt her with.

Now, the pair has instantly become one of Mzansi’s most-loved couples and their content serves #CoupleGoals! The latest being their trip in Paris, in France…

THE TWO LOVE BIRDS IN PARIS

Fans of DBN Gogo (real name is Mandisa Radebe) flooded her comments section when she shared loved-up images of her and her boyfriend, Focalistic (Lethabo Sebetso). The couple is boo’d up in the city of love.

In one image, the DJ is seen holding hands with her man, and in another, she has her head on his shoulder with the Eiffel Tower in the background.

ALSO READ: ‘Power of being you’: Focalistic says authenticity changed his life [listen]

HOW DBN GOGO AND FOCALISTIC MET

Although fans were only introduced to this ampiano love in February,  the two musicians actually go way back.

In 2018, the Possible producer wished the Ke Star hitmaker well in a sweet birthday tweet that was accompanied by a video of them looking cozy.

“Happy birthday Space wami. I cannot wait to see you take it to the top. You inspire me in more ways than one. You deserve nothing but the best this life has to offer. Magical. Pure Brilliance. Absolutely Excellent, you are,” DBN Gogo had written in 2018.

According to SowetanLive, DBN Gogo lived in France for five years in the 90s with her mother and late stepfather Zola Skweyiya (an ANC veteran). Her mother Thuthukile Skweyiya is also an ANC veteran, while her biological father is former Minister of Energy Jeff Radebe.

The couple met at the University of Pretoria in 2017 when they were students. President Ya Straata, as he is affectionately known, was a political science student at the time. As the sone of of former political journalist Kgomotso Sebetso, he was inspired to follow in his father’s political footsteps.

Fans of the couple are in love with their content.