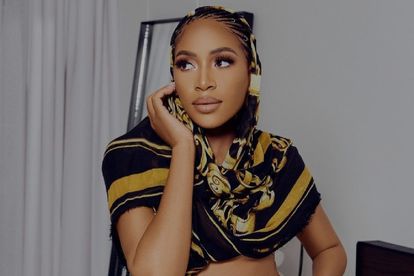 Blue Mbombo has replied to rumours her baby daddy is millionaire Auswell Mashaba. Image via @blue_mbombo/Instagram

Blue Mbombo has replied to rumours her baby daddy is millionaire Auswell Mashaba. Image via @blue_mbombo/Instagram

South African socialite and model Blue Mbombo recently welcomed her first child, a daughter whom she calls Duchess. And while fans are excited for her, there is curiosity about who her baby daddy might be.

When the beauty announced her pregnancy on 14 February this year, there was speculation that amapiano musician DJ Sumbody was the mystery man, however, nothing came out of that.

Recently, however, it was alleged that Blue’s baby daddy is Auswell Mashaba – a wealthy businessman in the rail and engineering sector. With these rumours making the rounds on social media, the former Big Brother Mzansi season two contestant has responded.

Mashaba is the founding director of AM Consulting Engineers (AMCE). He is also a director and shareholder Swifambo Rail Leasing. In February last year – through an affidavit – he explained his role in his company scoring a R3.5 billion contract to deliver locomotives to the Passenger Rail Agency of SA (Prasa) in 2012.

Following a post by controversial social media entertainment commentator Musa Khawula that Mashaba fathered Blue’s daughter, she called him out for “lying unprovoked”.

“No dude, this isn’t cool. Why are you lying unprovoked? You can’t ruin people’s names for likes and retweets,” she told Musa who did not respond.

When Blue denied the Mashaba claims, tweeps brought back the DJ Sumbody rumours, however, she paid them no mind.

According to one tweep, the amapiano producer was in attendance at Blue’s gender party, and others have claimed that the musician is married.

“The simplest task we require of him and he lies. We all know the baby daddy is DJ Somebody, we’ve been knew for months now,” one tweep said.

While another said, “Musa is lying here. Blue baby daddy is a well-known DJ.”