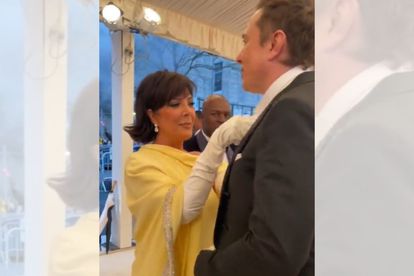 The saying: “The devil works harder, but Kris Jenner works harder” may ring true after the infamous “momager” was caught trying her best to impress the world’s richest man: Elon Musk

In a clip taken at the Met Gala on Monday night, Kris – who is mom to Kourtney, Kim, Khloe, and Rob Kardashian, as well as Kylie and Kendall Jenner – was seen getting up close and personal with the billionaire businessman.

In the clip, which has gone viral on social media, Kris Jenner is seen approaching Elon Musk and his mother Mae.

“Let me fix this”, she said as she fiddled with the South African star’s bowtie.

Elon – who is close friends with Kanye West – also stopped for a chat with his estranged wife Kim Kardashian at the event.

Joining them was Kim’s new bae Pete Davidson, who fist-pumped Elon Musk, and Kris’s boyfriend Corey Gamble. Whilst it’s not clear what the group was discussing, Elon’s ownership of Twitter could be an obvious starting point.

@longle_long: “Which one of my daughters do you like?”

@ThisAJoke2You: “These are power moves. She knows exactly what she’s doing. Taking complete control of the situation with an indefensible move”

@Dee_Batch: “She said let me get a piece of that billionaire. You ain’t fooling us, Kris”