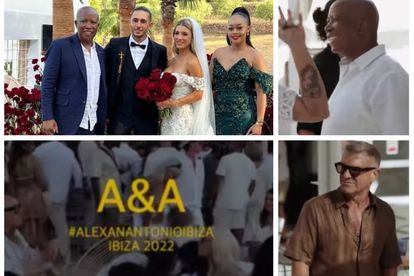 Inside the luxurious Ibiza wedding of Alexa Mazzotti, attended by Julius Malema and wife Mantwa.
Image via Instagram
@festivalofdreams_events
@julius.malema.sello

Inside the luxurious Ibiza wedding of Alexa Mazzotti, attended by Julius Malema and wife Mantwa.
Image via Instagram
@festivalofdreams_events
@julius.malema.sello

Despite the criticism from South African back home, Julius Malema and his wife Mantwa had the time of their lives after partying up a storm in Ibiza alongside pal Adriano Mazzotti earlier this month.

The leader of the EFF courted controversy after he was seen “living his best life” at the Spanish party island as a guest at the Mazzotti family wedding of daughter Alexa.

Adriano Mazzotti is a well-known SA businessman who owns tobacco company Carnilinx and has been labelled an “alleged kingpin in the multibillion-rand smokes smuggling business”, according to Daily Maverick.

But despite attending the week-long wedding celebration, Malema has insisted he footed his own expenses to the idyllic holiday destination.

Over the past few days pics and clips of Malema partying in Ibiza alongside the Mazzotti family – including spinning the decks and downing shots – have gone viral.

Also in Ibiza at the wedding celebration – which included parties on the picturesque Experimental Beach –  were the Major League DJ twins, Black Coffee and his son Esona and the husband of Tamaryn Green Ze Nxumalo. Fellow EFF member Vuyani Pambo also scored himself an invite to the exclusive celebration.

Gayton McKenzie is changing lives of the people on the ground. EFF cult leader Julius Malema is partying and drinking in Ibiza. #MalemaIsAnAlcoholic pic.twitter.com/Bd4H9jEKhQ

Malema and Mazzotti’s friendship goes back many years to when the outspoken politician was still in the ANC Youth League. According to News24, Malema and his family live in a luxury Hyde Park house that belongs to Mazzotti, who once also donated R200 000 to fund the EFF.

The publication added that Mazzotti admitted criminality to the South African Revenue Service (SARS) in 2014. In an affidavit, the wealthy man admitted to being complicit in fraud, money laundering, corruption, tax evasion, and bribery.

However, Malema has insisted he footed the bill for his and his wife’s travel expenses to Ibizia. “He is funding it himself. He is working very hard [and] he is warranted to take a break when he feels like it,” EFF spokesperson Sinawo Tambo told News24.

On social media, South Africans – including a number of EFF supporters – slammed Malema for associating with Mazzotti, whom some even labelled “mafia”.

INSIDE THE LAVISH MAZZOTTI WEDDING CELEBRATION

Meanwhile, more pictures and videos from the Mazzotti wedding celebrations have been shared on social media.

Alexa is the daughter of Adriano and Analisa Mazzotti and the sister to Matteo Mazzotti.

The couple invited close family and friends to the celebration where no expenses were spared. According to organisers, the wedding was “inspired by the couple’s Italian – Sicilian heritage……with more than a dash of Ibizan sparkle and an unforgettable dress by Warrick Gautier!”