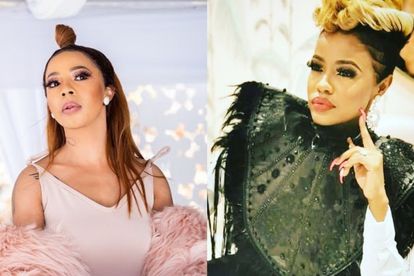 South African singer Kelly Khumalo is seemingly ready to mend her relationship with her sister Zandie Gumede after a therapy session on the latest episode of her Showmax reality show which aired on Tuesday 12 July.

KELLY IS READY TO MEND HER RELATIONSHIP WITH ZANDIE

Zandie Gumede “divorced” her sister Kelly Khumalo after she made claims about her husband and a money scandal. She claimed that Kelly is toxic and added that she has endured so much “abuse and nonsense” from her.

Zandie blamed Kelly for the time she went to jail, being exposed to drugs and more. The pair have had a rocky relationship since but it seems they are ready to move past this.

“I’m at a point where I’m tired of being mad. It doesn’t serve me any more and I think we should find an amicable way of dealing with each other. The biggest issue is I felt my mother wasn’t doing her part,” she said.

Ntombi explained that nothing has changed in her relationship with Zandie or Kelly. So, she wants to bring them together.  Kelly then revealed that she and Zandie are now on speaking terms.

“We haven’t had serious conversations, but we speak regularly. I feel like I’ve lost so much time, especially where my godson is concerned,” she said.

KELLY IN TEARS OVER HER GODSON

It seems things changed for Kelly when she found out her sister was pregnant. Zandie welcomed her first child with businessman husband Hloni “Mhlo” Gumede on 21 September 2021. Kelly expressed that she loves her nephew although she has not met him yet. She also burst into tears when speaking about him.

“So I heard through the grapevine that my sister was pregnant. I haven’t met my godson but damn, I love that boy,” she continued.

Zandie previously slammed a reconciliation with her sister after she posted a photo of her son with Kelly’s two children – Christian and Thingo. Fans thought the sisters reconciled but Zandie explained that she did not want her issues with her sister to affect her relationship with her niece and nephew.

“As an adult and a parent I made a decision that my nephew and niece would never be affected by what’s going on between me and their mother, at least not from my side. I’m not going to deny them access to me or their cousin. That would be utterly cruel of me,” she wrote.

Zandie then made it clear that there was no reconciliation between them at the time.

“The situation between me and their mother remains the same and my feelings remain the same. I got all your messages of excitement after seeing them together, they really warmed my heart, but what I noticed is that some took my post as a sign of reconciliation or some reunion between the two of us, but it was not. It was merely about the children,” she continued.