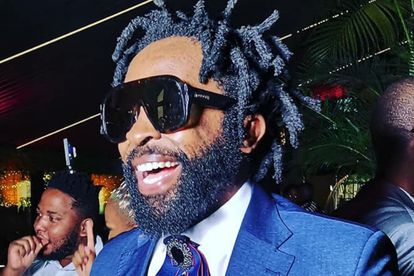 South African musician DJ Sbu is very vocal on social media and is seemingly not about to be painted in a bad light by an entertainment blogger. The Remember When It Rained hitmaker just put his foot down after popular entertainment blogger Musa Khawula alleged that he was involved in a housebreaking incident that saw singer Zahara get robbed of 6 of her SAMA award trophies.

After spotting the post, Sbu told Musa to delete it or face expensive legal action.

Musa Khawula has been referred to as South Africa’s Wendy Williams because of his tendency to share celeb news often with very shady captions.

It appears his spicy way of delivering gossip may have landed him in hot water after he tweeted that DJ Sbu is rumoured to have sent his “thug friends” to rob Zahara – who previously accused him of failing to pay her, her share of the work they did together – of the awards.

“DJ Sbu is rumored to have sent his thug friends to steal 6 of Zahara’s awards sets to release 10 NFT pieces on the 30th of April 2022. These allegations follow DJ Sbu after he swindled Zahara of her Loliwe funds,” Musa’s tweet read.

Sbu did not take likely to this and swiftly threatened Musa with some legal action. He also gave Musa the opportunity to delete the tweets.

ALSO READ: ‘When I met Zahara I was already rich’: DJ Sbu on unpaid royalty claims

“R1M Lawsuit coming your way my brother brace yourself,” wrote the DJ, while adding, “my legal team says I should at least first give you a chance to delete it in 2 hours. So by 5pm if this tweet is still up, get ready for R1M debt.”

A fearless Musa however refused to back down and clapped back by telling Sbu to pay Zahara.

Many people shared their thoughts on the exchange and also on the fact the issues between Zahara and Sbu are still not resolved. Here are some of their comments:

“I took the screenshot in case you gonna need evidence in court, in the meantime, Musa don’t fold my brother.”

“I thought DJ Sbu is learned … I’m so disappointed, I wonder what the legal documents of Mofaya look like.”