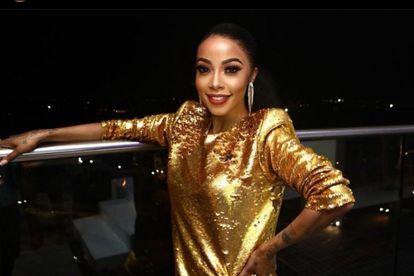 Twitter users have shared their thoughts on singer Kelly Khumalo after her lawyer was excused from the courtroom during the murder trial of her “baby daddy”, former Bafana Bafana captain Senzo Meyiwa today (25 April).

Senzo Meyiwa was said to be killed in an armed robbery at the home of his then-girlfriend Kelly Khumalo in Vosloorus on 26 October 2014. Kelly, along with her mom Ntombi, her sister Zandie, Zandie’s boyfriend Longwe Twala, Kelly’s two children – Christian and Thingo as well as Senzo’s two friends – Mthokozisi Thwala and Tumelo Madlala were present when the soccer star was killed.

Five hitmen – Muzikawukhulelwa S’Tembu Sibiya, Bongani Sandiso Ntanzi, Mthobisi Prince Mncube, Mthokoziseni Ziphozonke Maphisa and Fisokuhle Ntuli were arrested and charged after being accused of murdering Senzo. Kelly sent her lawyer, Magdalene Moonsamy to conduct a watching brief at the murder trial but she was excused from the courtroom today.

Moonsamy was asked to leave the courtroom in order to “preserve the purity of court processes.”

“You will excuse us, as to what you do when you are outside is not in our terrain. People who feature as witnesses or potential witnesses are requested to exit the courtroom,” said Judge Tshifhiwa.

“They are not supposed to sit in and listen to evidence if they will be called later, because we don’t want anybody to tailor their evidence after what they have heard. They should testify from what they know. Even if you are called as defence witness if you sit in you compromise the quality of the evidence you are going to give,” continued the judge.

Kelly began to trend on Twitter as Tweeps weighed in on her lawyer being excused from the courtroom. Many think it was a good move by the judge. Take a look..

“#SenzoMeyiwa well done Court for instructing Kelly’s Lawyer to leave Court????????????????imagine watching what the accused will say what nonsense is that,” tweeted @pumlag.

“The same reason as I don’t see why Kelly Khumalo’s lawyer was in court in the first place, I mean she can always sit in her office and watch the proceedings just like everyone else,” tweeted @zizi_square.

While others did not think it made sense to remove Moonsamy from court.

“I don’t see the reason why the Judge requested Kelly Khumalo’s lawyer to excuse herself from the court, whereas the recording of the proceedings is in the public domain #SenzoMeyiwaTrial,” tweeted @OtsileKole.