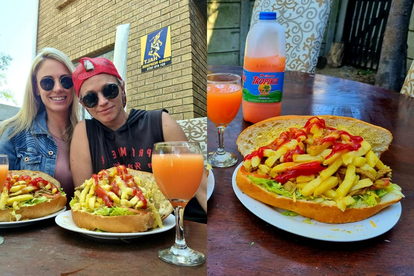 A Cape Town couple recently became the center of a big joke after they shared some snaps of themselves enjoying a masala steak gatsby. Unfortunately for them the steak masala Gatsby police spotted the post and were soon sharing hilarious jokes and comments about the steak or rather lack thereof.

Most people are very proud of the things they are able to cook up in their kitchens. And living in a media where social media plays an important part in our lives, everything gets snapped and posted online. Unfortunately, this is not always a good idea as people are quick to start judging!

A Cape Town couple found this out the hard way when they headed to Facebook to share a snap of the steak masala Gatsby they made in their very own kitchen.

Chantal le Roux, 34, and her partner Marzanne Baard, 32, shared some snaps of themselves posing with the gatsby in a Facebook Gatsby group called The Gatsby Society and soon got a very good roasting.

According to the Gatsby-loving community of Cape Town, their steak Gatsby was not up to standard at all because well, it lacked the main ingredient — steak.

ALSO READ: What in the chocolate breyani? Bizarre breyani shocks many [Watch]

You can probably bet that locals were not taking it easy on the young couple and resorted to thoroughly roasting them about not adding enough steak. One person even hilariously commented that the steak that was supposed to be inside the bread roll was taking the pictures.

Here are some more hilarious comments made about the meal:

“What in the Uit Die Blou Van Onse Hemel is this?”

“This is a Ciabatta with chips. How dare they call this a gatsby. You must have a smoothie with this roll.”

“If you plugged earphones into that roll, you’d hear ‘welcome to Discovery medical aid’.”

Kim, who? Kanye has a ‘crush’ on Kylie Jenner’s ‘bestie’ Stassie