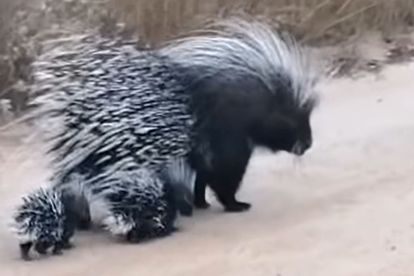 The real-time wildlife app, Latest SIghtings recently shared an adorable video of a mother porcupine taking her two porcupettes on an adventure in the Kruger National Park near Lower Sabie.

Mother porcupine and her porcupettes

According to the app’s Facebook page, the sighting is very rare. It is reported that porcupines prefer rocky hills and outcrops, as they must have shelter during the day.

They often take shelter in caves or antbear holes and build dens which can be up to 20 m long with a 2 m deep living chamber. According to the African Wildlife Foundation, porcupines are the largest and heaviest of all African rodents. The legs are short and sturdy, and each foot has five toes, all equipped with powerful claws. Their most recognisable feature is, of course, its quills.

According to the foundation, the gestation period of the African crested porcupine is about 112 days.

Between one and four young are usually born in the grass-lined burrow. They are well-developed and are born with open eyes and leave home for the first time at about two weeks of age, as their quills — soft at birth — begin to harden.

After the video was shared on 22 August, it went on to clock in over 2.5 million times on Facebook alone.

Watch: An adventure in the Kruger

Over 5 000 people commented on the post, saying that they “love how attentive the mother is”.

“She is very attentive, stopping often to check that they are keeping up with her!” said one social media user. “Love how she pauses for them to catch up. Always checking on them. The porcupettes are so adorable.”

Others have never seen a porcupette before.

“It is adorable I have never seen porcupine babies before, learn something new each day,” said another.