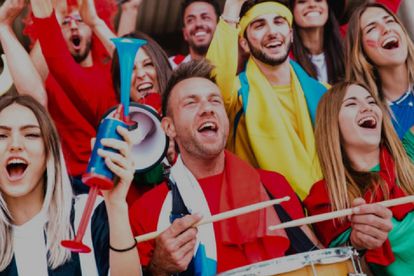 Fans attending the Soccer World Cup in Qatar have been warned against having pre-marital sex. Image via Unsplash

Fans attending the Soccer World Cup in Qatar have been warned against having pre-marital sex. Image via Unsplash

Football fans attending the FIFA World Cup in Qatar in November this year had better familiarise themselves with the strict laws of the Arab country, lest they get locked up.

According to the Daily Star, an insider revealed that the only action allowed is on the field and not in the sheets, as “illegal” sex is banned. However, there is more…

NO SEX FOR SINGLES AT THE WORLD CUP

Pre-marital sex is already illegal in the Muslim- majority country, regardless of who you are. An insider revealed that visitors attending the World Cup will be no acception.

“Sex is very much off the menu unless you are coming as a husband and wife team. There definitely will be no one-night stands at this tournament.”

The source, who is a police officer, added that lawbreakers will be sentenced to seven years in jail if caught with their pants down, adding that even public displays of affection (pda) is not allowed.

And that’s not all as the culture of boozing after a game, that soccer fans love so much, is also prohibited.

“There will be no partying at all really. Everyone needs to keep their heads about them unless they want to risk being stuck in prison.

“There is essentially a sex ban in place at this year’s World Cup for the first time ever. Fans need to be prepared,” the source added.

SAME-SEX INTERCOURSE IS ALSO A NO-GO-ZONE

The LGBTQIA+ community has also been warned not to engage in any sexual activity, whether married or not.

In addition, the Mirror reports that rainbow flags are banned, according to Major General Abdulaziz Abdullah Al Ansari who is the chairman of the National Counterterrorism Committee of Qatar.

“If he (a fan) raised the rainbow flag and I took it from him, it’s not because I really want to, really, take it, to really insult him, but to protect him.

“Because if it’s not me, somebody else around him might attack (him). I cannot guarantee the behaviour of the whole people. And I will tell him: ‘Please, no need to really raise that flag at this point.’”

ALSO READ: ‘What I needed was a princess’: Rebel Wilson comes out during Pride