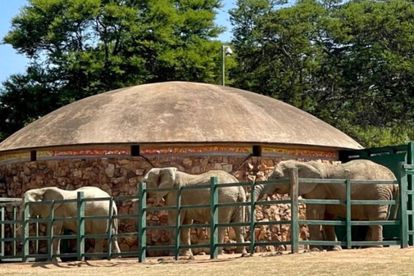 Local animal rights organisations have come together to take on the Johannesburg Zoo over the conditions under which three elephants are kept. Image via Twitter @emsfoundationsa

Local animal rights organisations have come together to take on the Johannesburg Zoo over the conditions under which three elephants are kept. Image via Twitter @emsfoundationsa

Animal Law Reform South Africa (ALRSA), the EMS Foundation, as well as a member of the South Peninsula Customary Khoisan Council, Chief Stephen Fritz, have come together in the hope of releasing three elephants from the Johannesburg Zoo which are reportedly being held in conditions that do not look after their basic needs.

In their application to the Gauteng High Court, in Pretoria, the animal rights activists hope to have the elephants — Lammie, Mopane and Ramadiba — released into a natural environment.

Michele Pickover, executive director of the EMS Foundation, told GoodThingsGuy that an elephant in a zoo is an exhibit “deprived of the natural environment and social conditions”.

“We are failing to teach children anything about elephants – rather forcing them into submission for so-called ‘human entertainment’. A better exhibit would be a live link to the elephants living out their real lives in a natural environment,” said Pickover.

She also added that the elephants were “cruelly” separated from their families and have experienced “life-long trauma” as a result.

“By keeping these elephants in inadequate conditions, the zoo fails to meet both its constitutional and statutory obligations to treat these animals with respect and not cause them unnecessary suffering,” said Blichitz.

“Their continued failure to release the elephants also constitutes an unlawful and unreasonable decision in administrative law.”

In 2019, the EMS Foundation and Ban Animal Trading South Africa claimed that Mopane and Ramadiba were purchased from a local game reserve where they were used for elephant-back safaris.

In a lengthy Facebook post, the organisation claimed that the Johannesburg Zoo forced Mopane to do tricks.

“The zoo has clearly demonstrated that the welfare of the elephants is not their concern. Their main concern is finding a way to use animals to keep them in business and in the process to desensitise people to the terrible plight wild animals find themselves in,” wrote Ban Animal Trading South Africa.