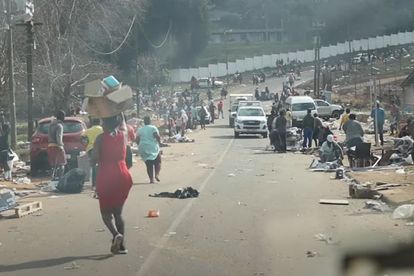 A video of the harsh reality of what happened during the violent riots and looting in KwaZulu-Natal and Gauteng in July 2021, is up for a major cash prize at the My RØDE Reel 2021 Short Film Competition.

According to SAPeople, Anthony George Kirkwood’s film Purge South Africa, The Week We Did Not Back Down has been submitted to compete in what is considered to be the world’s largest short film contest.

The South African previously reported that the filmmaker and creative director was on the frontline in Durban, filming day and night during the unrest.

The video showcases the harsh, brutal reality of what went down when thousands of so-called former president Jacob Zuma supporters descended on factories, shopping centres, warehouses, and malls, burning, looting, and destroying everything in their path.

“The lack of sleep, camaraderie, dead bodies, being shot at, this was the taste of war. There was no time to think about tomorrow or next week,” Kirkwood explained.

Riots and Looting in SA

Kirkwood said he would never forget the week he endured on the frontlines. He worked alongside paramedics, police, shop owners, community members, and security companies.

“It was a week I think that a lot of people that I met would never forget. I think the best way to describe it – it was a week from hell literally… on the front line. The number of dead bodies I saw, the number of shots fired, the amount of looting that happened, the destruction and violence were absolutely appalling. No one could train you for what we have witnessed on the frontline. Those on the frontline all knew the presence of each other. It was enough to understand we were not going to back down from this Zuma fraction.”

You can watch Kirkwood’s Purge South Africa, The Week We Did Not Back Down below:

*Please note that the video contains graphic content and can upset sensitive viewers.