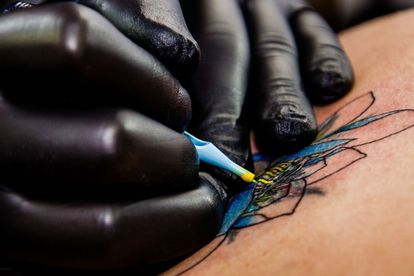 Getting a tattoo touch-up should be as easy as 1,2,3 but things took a dramatic turn for this British plus-size model. What she thought would be a simple touch-up to her vintage buttock tattoo, ended in both her and the tattoo artist visiting the emergency room after a “gassy” incident.

Tracey Munter visited Good Tattoo Emporium in Rotherham, England, in 2016 to have the finishing touches applied to a representation of the famous chariot race scene from the 1959 film Ben Hur directed by William Wyler. Tracey had gotten the tattoo on her buttocks.

Tattoo artist Jason Burns described Tracey’s tattoo as “a big job in more ways than one”.

Things took an unexpected turn when Tracey let out a tiny fart and it unexpectedly met Jason’s cigarette. Jason narrated the incident creatively with some classic English humour.

“Next thing is, I sense a slight ripple in the buttock cleavage area just around Charlton Heston’s whip, and a hissing sound – more of a whoosh than a rasp – and before I know what’s happening, there’s a flame shooting from her arse to my fag (cigarette) and my beard’s gone up like an Aussie bush fire.”

Jason rushed to the sink to put out the flames while 23-year-old Tracey fanned her buttock area with a damp towel. The flames also set fire to Tracey’s thong.

“I didn’t even realise she was wearing one. You’d need a sodding mining licence and a torch to find out for sure. She could have had a complete wardrobe in there and I’d have been none the wiser,” said Jason.

Treated for minor burns and shock

Both Tracey and Jason had to be rushed to the Rotherham District Hospital where they were treated for minor burns and shock. They both blamed each other for the incident.

“I’m furious. I’ve got a face like a mange-ridden dog and my left eyebrow’s not there anymore. I don’t know about Ben Hur; Gone With The Wind‘s more like it. You don’t just let rip in someone’s face like that. It’s dangerous,” said Jason.

Tracey said she was still in agony about the incident and said Charlton Heston looks more like Sidney Poitier now.

“Jason shouldn’t have had a fag on the go and there’s no way I’d guff on purpose. He’d had me on all fours for nearly an hour. I can only put up with that for so long before nature takes its course. My Kev knows that I give him my five-second warning and I’d have done the same for Jason, but I didn’t get chance — it just crept out.”