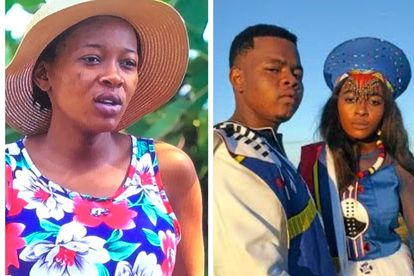 During the second episode of the fourth season on Sunday 12 June, tweeps could not help but express concern for the 18-year-old expectant mom who looks frail and seems to have lost weight.

Season four of Isencance Lengane started on a sour note last week when viewers learnt that their favourite, Thando, did not pass her grade 12 studies.

Having to juggle school, pregnancy and a toxic marriage had taken its toll on the Nkandla-born teen who married her high school sweetheart, Siyacela Dlamuka when she was only 15 and him, 16 in 2019.

In the second episode, viewers got to see Thando who has relocated from Ulundi (her husband’s home) to Durban to upgrade her studies. However, many tweeps could not help but worry about her health as she looks like she has lost some weight and viewers are attributing it to her marital stress.

TROUBLE IN PARIDISE FOR SIYACELA AND MANTO

However, it isn’t all doom and gloom for Thando’s legion of fans on the show as her cheating husband, Siyacela and his mistress, Manto, are not on good terms.

The second episode saw the couple go out on a date, but during their confessionals, they could not help but individually vent about their dying relationship.

Siyacela, who proposed to Manto in the third season, claimed to be falling out of love with her, saying she has been unfaithful. The expectant dad also claimed he does not see a future with Manto, claiming he proposed for the sake of it.

Meanwhile, the feeling is mutual for Manto who claims she made a mistake by dating Siyacela as she now sees him as a liar. The mom-of-one said her man is a pauper and a “dog” who relies on her for all his daily essentials, including food.