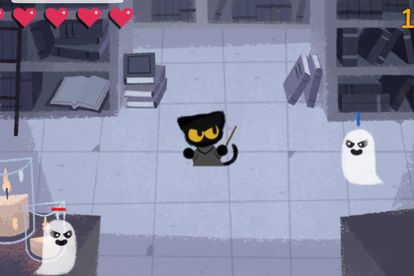 Google Doodle resurrected Momo the black Magic Cat to celebrate Halloween this year. And the heaven’s hear us, we need some adorable cat-cuteness to balance this year…

The game replaced Google’s normal logo on the homepage and serves as a throwback to one special Halloween four years ago when we were first introduced to the fearless feline from Magic Cat Academy, our beloved Momo.

Well, Momo is now back to save the Magic Cat Academy once again. The poor kitten has its work cut out for it too, from venturing deep underwater in 2020 to defend fur-friends from the Big Boss Ghost.

Momo will have to go up against a school of ghouls. Creators of the Google Doodle said they “picking up right where [the] 2016 Magic Cat Academy Doodle left off with a subaquatic shriek-quel”, and added:

“Dive in with Momo the cat to help new friends and reach new depths in her adventure against the Big Boss ghost and its school of ghouls…underwater. Feline lucky? Swim and swipe to PURR-tect the ocean and its creatures before it’s too late!”

How to play Momo this Halloween

Click play and you’ll be met with an introductory animation of Momo bravely fighting off ghosts and ghouls. When plunged into the sea, Momo is attacked by the Big Boss and its school of ghouls.

It’s your duty now to help Momo defeat her adversaries. Strike them with her wand by drawing the symbols with hover above their heads with the cursor. You must do this before the ghosts get to Momo.

At some point, you’ll also need to defend Momo against multiple ghosts simultaneously, and defeat them before they descend upon Momo. The quicker you draw, the quicker Momo will be safe.

There are four levels to the game and it only gets harder as you progress, and as Momo dives deeper into the ocean. Remember that you only have five line-lines, which are indicated as hearts in the top left-hand corner of the screen.

Momo will lose one heart every time a fish touches her, and she’ll lose; the game if all her heart-shaped life-lines are lost. That said, you can earn back hearts by picking up other valuable shapes along the way.

The four levels of Momo

When nearing death, the Immortal Jellyfish can revert back to the polyp stage & start its life cycle all over again—and can do so an unlimited amount of times!

“Boops” derives from the Greek “boōps,” meaning “cow eye.” In most languages, the fish’s name refers to its large, buggy eyes.

The Vampire squid has no teeth & doesn’t hunt prey! It lives off small, organic material that falls to the ocean bottom known as “marine snow.”

Talk about a fish gone fishin’. Instead of hunting, the Anglerfish uses its esca (or modified fin ray) to lure prey. The esca can illuminate thanks to bacteria!

Also read: Spotify rolls out new feature to search for songs via lyrics