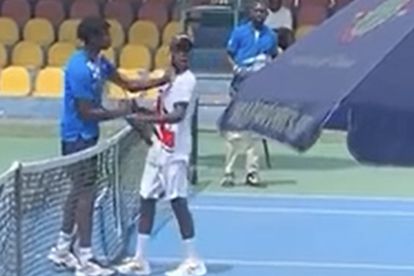 As both players went to shake hands at the net after the match, footage emerged showing Kouame slapping Ankrah unsuspectingly across the face with his left hand. It is not known what could have caused this reaction, but other video posts also showed how a fist fight then broke out among other onlookers courtside.

Kouame was ranked No. 589 in the ITF Junior Rankings, but the teenager was the No. 1 seed heading into the tournament in Accra, Ghana.

The Ghana player — who is ranked No. 1688 on the ITF Junior Rankings — will return to the court on Tuesday for a doubles match against Italy’s Davide Brunetti and France’s Mickael Kaouk.

Footage of the incident quickly circulated on social media, and immediately drew numerous comparisons to the shocking altercation recently between Hollywoods stars Will Smith and Chris Rock, with even former Springbok Rob Louw making this reference.

You can watch the incident between the young tennis players below: