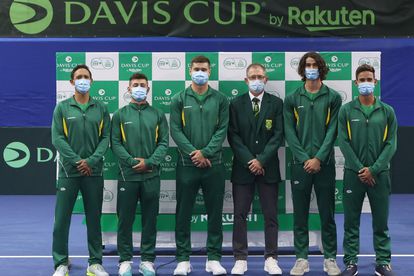 South Africa have been drawn away against Bulgaria in their Davis Cup World Group II tie in September 2022. Photo: Israel Tennis Association

South Africa have been drawn away against Bulgaria in their Davis Cup World Group II tie in September 2022. Photo: Israel Tennis Association

South Africa have been drawn away against Bulgaria in their Davis Cup World Group II tie in September 2022.

Having fallen to Israel in their World Group I playoff in Ashdod earlier this month, South Africa subsequently missed out on promotion.

Returning to Group II, they will again have to play away from home in their next clash, and they face a strong Belgian team who will be difficult to beat.

“We will have to go and play away once again, and Bulgaria has a tough player currently ranked No 29 in the world, Grigor Dimitrov, so he will have a tough battle against (world No 44) Lloyd Harris,” said SA captain Christo van Rensburg.

“They also have another player ranked in the top 200 (Dimitar Kuzmanov).”

Although they will not have it easy, Van Rensburg is confident his squad – again expected to include a blend of youth and experience – will be able to put up a fight as they attempt to climb the ladder in the international team competition.

“I will always back my horse, and from now until September it will be my job to go and find out who will be available for the tie,” he said.

“We will wait to find out on what surface they are playing and put a team together probably about a month before this challenge.”

South Africa have beaten Bulgaria before in the Davis Cup

South Africa have played Bulgaria once in 2019 in Cape Town winning 4-1.

The Davis Cup World Group II tie between South Africa and Bulgaria will be played at a venue in Bulgaria (yet to be announced) either on 16-17 or 17-18 September 2022.