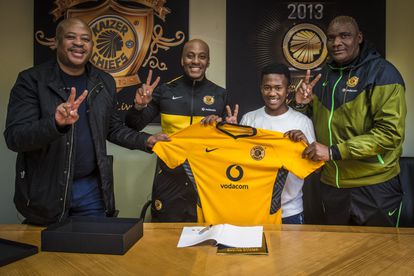 It’s been a pretty indifferent season for Kaizer Chiefs fans, but there are a few reasons to be very optimistic about the future.

Amakhosi’s famed youth academy within Naturena didn’t claim that status for nothing. As ever, there are some seriously talented youngsters coming through the ranks.

Three Kaizer Chiefs youngsters that will be superstars

The latest wonderkid off the Kaizer Chiefs production line is Mduduzi Shabalala. Born in 2004, the 18-year-old scored on his first team debut, which indicates that he isn’t overwhelmed by the pressure.

Shabalala is known for his exceptional balance, pace, flair, agility, dribbling and close control. As a diminutive attacker he won’t be winning too many aerial duels, but he’ll certainly be causing defenders all sorts of problems on the ground. It’s uncertain what his best position is just yet, but he can operate in a variety of attacking roles. For the full low-down, check out our Mduduzi Shabalala player profile.

Plenty of noise is being made about Njabulo Blom, but another 22-year-old central midfielder also deserves some praise. Sabelo Radebe was born in the year 2000, and plenty of insiders at Naturena predict a big future for the schemer in the centre of the park. He’s made two appearances in the DStv Premiershio this season and will be gunning for more after the World Cup break.

While it may have been unthinkable to say this five years ago, is Itumeleng Khune’s future at the club really that certain? It feels as though the Chiefs are at the end of a natural cycle. Teenage ‘keeper Karabo Molefe is a top prospect and highly rated within the ranks at Naturena already and he’d make that transition relatively smooth. At 19, however, he is still a raw prospect. Certainly one for the future.

Nkosingiphile Ngcobo has shown that there is a pathway into the Kaizer Chiefs first team for youngsters. Maybe, sooner rather than later, it will be time for Arthur Zwane to unleash this trio on South African football.