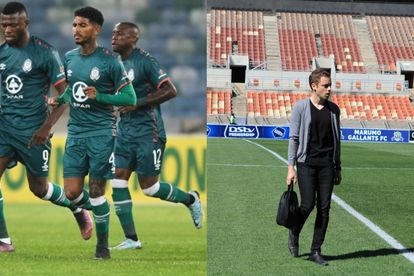 Amazulu have struggled for results in 2022. Photos: Backpagepix

Amazulu have struggled for results in 2022. Photos: Backpagepix

Amazulu coach Romain Folz says the squad have been working hard during the break.

Folz believes the squad he inherited from Brandon Truter when he took on the job lacked the physicality required for the PSL.

The coach believes a string of poor results at the start of his tenure was down to the team not being match ready.

“I felt like most of our players were not ready physically,” said Folz according to FARpost.

“When you face a [Sundowns] team that is good on the ball, you must make sure you play well and move the ball very quickly,”

A 1-0 win over Stellenbosch FC on 30 October has been the sole victory for the tea under Folz.

However the coach insists that the team will improve when the PSL resumes.

“We will be better after the break as we will improve during the FIFA [World Cup] break,” Folz added.

“When I came here, my priority was to stop the sequence of defeats at the club and try to get everyone in a state of mind to understand they can be solid as a unit, and that’s one of the things I will be working on during the break.”

Amazulu have cut the image of a team that is far from united and Folz will have some task bringing them together.

The club ownership are expecting results after significant investment but they may soon find that what works in the business world doesn’t necessarily work in football.

Amazulu finished second in the PSL in Benni McCarthy’s first season in charge but have since failed to replicate that kind of form.

Since McCarthy was sacked Usuthu have undermined the position by making frequent changes.

Amazulu are seventh on the PSL log and could put themselves into contention for continental football if they can turn things around when action resumes.