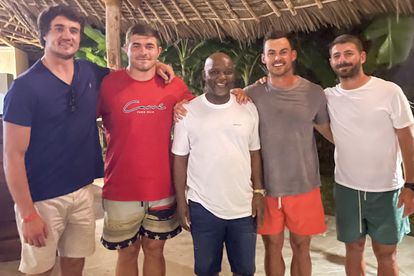 Pitso Mosimane, Benni McCarthy and Rassie Erasmus will go head-to-head for the honour of being crowned Favourite Sports Personality and they face even more stiff opposition!

READ | PITSO MOSIMANE AND PERCY ON THE BRINK OF MAKING HISTORY

Mosimane, Erasmus and McCarthy have all been nominated for this award and they face stiff competition from Proteas captain Temba Bavuma.

The award honours coaches, captains and players who have made the most game-changing impact in their sport. This prestigious list of nominees will certainly go down to the wire…

MOSIMANE VS MCCARTHY VS ERASMUS VS BVUMA

Mosimane has changed the game and SA’s football print on the World. He has done just about everything from leading Al Ahly to successful FIFA Club World Cups to dominating the CAF Champions League, Egyptian Premier League and even bringing Percy Tau to Egypt.

That is not all, he is always one of the first to wish his home nation on public holidays or to announce his support and respect for his countrymen.

BAFANA BAFANA: HUGO BROOS PUTS HIS LIFE ON THE LINE FOR SA!

He goes up against former PSL coach and Bafana Bafana legend, McCarthy.

Despite recently being axed by AmaZulu, McCarthy lead his side to a historic maiden first CAFCL.

READ |  BATTLE FOR BENNI: WILL MCCARTHY CHOOSE CHIEFS OR PIRATES?

He is one of the more controversial men on this list (with Erasmus), as he is not afraid to speak his mind.

Even if it means speaking out against authority!

He may be jobless for now but he has caught the eye of Kaizer Chiefs, Orlando Pirates and SuperSport United.

Speaking of controversial, motivational and game-changing…

Introducing, Rassie Erasmus! He is all of the above and so much more.

Erasmus lead SA to the 2019 Rugby World Cup, The Rugby Championship, an historic win over the almighty All Blacks in NZ and he took the Springboks up to number one in the world.

That’s just the first half of his inspirational story… Erasmus went on to become the most famous ‘waterboy’ in rugby history.

Using his role to provide tactics and motivation to the Boks.

Furthermore, he spoke out against World Rugby during the prestigious British & Irish Lions series. Spending an hour pointing out decisions he deemed incorrect before ultimately facing a ban.

The ban allowed us to see a more personal and humorous side of Rassie who took to Instagram and Twitter to show us his dog and his daughters wanting him to leave – haha!

We have seen his tears, sheer passion, joy and laughter. He is my personal pick but it’s a close one!

Let’s not forget about Proteas captain, Bavuma. Following in the steps of Siya Kolisi, he became the first captain of colour to lead the Proteas. Although the Proteas did not taste much success, he has inspired a generation of future players.

Our national side is is in good hands with Bavuma, he is a model captain and human being.

READ | HOW A MISCALCULATION TAINTED THE LEGACY OF A PROTEAS GREAT

Who would you like to see selected as South Africa’s favourite sporting personality?