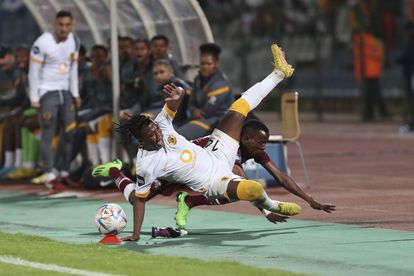 Bafana Bafana attacker Kgaogelo Sekgota should NOT be at Kaizer Chiefs, and that’s according to his former coach at Vitoria Setubal.

Mozambique coach Chiquinho Conde worked with Sekgota for two years at Setubal U23 team as the winger often struggled with game time in the senior team.

Now, according to Conde, Sekgota made a mistake by returning home as he’s too good to be playing his football in the PSL.

While it’s almost every player’s dream to play for Chiefs, Orlando Pirates or Mamelodi Sundowns, Conde is of the view that Sekgota shouldn’t even be at Naturena.

Conde and Sekgota recently met as Bafana Bafana took on Mozambique in an international friendly which Hugo Broos’ men won by 2-1.

And Conde admits he couldn’t even greet the Chiefs man because he was upset that Mozambique had just lost to Bafana Bafana.

“We didn’t get a chance to talk because I was unhappy I had lost, but I did greet him,” Conde told FARPost.

“I worked there for two years, and when Sekgota did not get game time in the first team, he used to play for the Under 23s [which I coached] to get match fitness.

“So, I would see him. I also worked with Sphephelo ‘Yaya’ Sithole. He’s a fantastic midfielder,” he added.

“He made a mistake by coming back to play locally. It is not good for his development as a player, as he is still young. Sekgota should not be at Kaizer Chiefs.”

Bulls confident of coping with frosty reception in snow-covered Lyon

Matric results 2022: Here are the top achievers in Maths, Science