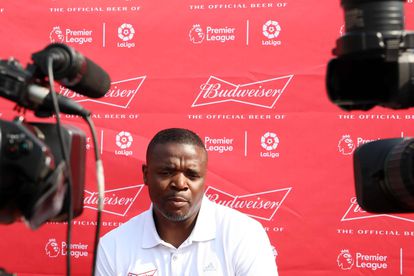 Aaron Mokoena during the 2019 Budweiser Announcement English League and La Liga at the Huddle Park Golf Course, Linksfield on the 05 August 2019 ©Muzi Ntombela/BackpagePix

Aaron Mokoena during the 2019 Budweiser Announcement English League and La Liga at the Huddle Park Golf Course, Linksfield on the 05 August 2019 ©Muzi Ntombela/BackpagePix

The future of Aaron Mokoena at Cape Town City is uncertain following the arrival of Eric Tinkler as the club’s new head coach.

Mokoena, who captained Bafana Bafana and played 107 times for the national team, was brought to Cape Town City as an assistant coach by Jan Olde Riekerink, who parted ways with the club last week.

The Dutchman was replaced by another former Bafana Bafana legend, Eric Tinkler, who returns to the Mother City club for a second stint at the helm.

As it often the case with new coaches, Tinkler is expected to bring in his own technical team which would see Mokoena leaving the club at the end of the season.

Tinkler, who was in charge of Cape Town City at their inception, has made a return after a number of years away.

According to an unnamed source close to Cape Town City, Vincent Kobola could reunite with Tinkler at the club next season having worked together at Maritzburg United.

“There are more changes expected in the club. Eric Tinkler is expected to bring his own technical team and wants to work with people he trusts,” the source reportedly told Kickoff.

“Mokoena is set to leave and join Jan Olde Riekerink at the exit door. Kobola could return to the club as assistant coach.”

Cape Town City are currently seventh in the DStv Premiership standings and all-but assured of a top 8 finish this season with two matches remaining.

They will next be in action at home against bottom side Black Leopards on Wednesday, 2 June (17:00) and wrap up their campaign away to champions-elect Mamelodi Sundowns on Saturday, 5 June (15:00).

Orlando Pirates one of the charismatic teams in Africa – Jose Riveiro

Just in! Level 2 WARNING issued for SEVERE thunderstorms and hail in KZN