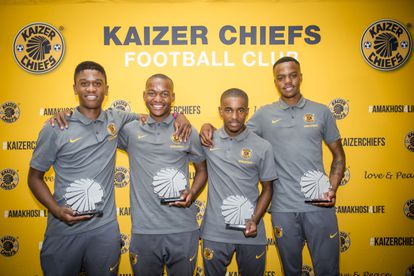 There was due recognition for the top youth talent at Chiefs this past weekend. Photo: kaizerchiefs.com

There was due recognition for the top youth talent at Chiefs this past weekend. Photo: kaizerchiefs.com

Kaizer Chiefs held their annual Youth Development Academy awards ceremony at the Naturena Village on Saturday 3 December, as the club recognised the most outstanding individual contributions in what has been a very successful campaign at age-group level for Amakhosi in the Gauteng Development League (GDL).

The event was attended by players, their parents and technical team members.

Check out the Chiefs media release and award winners below:

Special recognition was reserved for coach, Jimmy Jambo, for guiding the team to a successful defence of their GDL Under-13 title, with an exceptional record of winning 15 out of their 17 league matches.

At Under-15 level, Neo Bohloko bagged the Top Goal Scorer and Player-of-the- Season awards for his return of 21 goals in 24 games. Imaad Hendricks, was chosen as the Players’-Player-of-the-Season by his teammates

The Under-17 team also brought glory to the Club by lifting the inaugural GDL Under-17 Youth Cup, winning all of their games in the process; an astonishing achievement for which coach, Tshidiso Letsholonyane, deservedly received special recognition.

The Top Goal Scorer award was shared jointly between Mthokozisi Maseko and Matala Makhubo, who each netted an impressive 20 goals in their 27 matches.

For becoming the first Kaizer Chiefs team ever to win the Engen Knockout Challenge for the Gauteng region, and then going one better to taste victory over all the other provincial winners in the national Engen Champ of Champs, high praise was bestowed upon coaches, Ace Khuse and David Mathebula, in acknowledgement of their invaluable contribution to the Chiefs Under-19 team’s historic campaign.

Not to be left out, there were two prizes for goalkeepers, with Takalani Mazhamba and Mpho Moletsane receiving the Junior and Senior Goalkeeper-of-the-Season awards respectively.

“With the Under-13 GDL league trophy, the GDL Under-17 Youth Cup, the Engen Knockout Challenge Cup and the Engen Champ of Champs Cup standing proudly on display in the Club’s trophy cabinet, plus three players (Takalani Mazhamba, Imaad Hendricks, both Under-15 and Sfiso Timba, Under-17) currently on duty with the Men’s Under-17 National Team at the Region 5 Games in Malawi, the future looks bright for Kaizer Chiefs,” the club statement concluded.