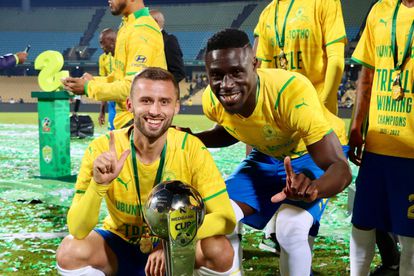 Title-holders Wydad Casablanca from Morocco are among 58 clubs who have entered the 2022/23 CAF Champions League. Photo: Backpagepix

Title-holders Wydad Casablanca from Morocco are among 58 clubs who have entered the 2022/23 CAF Champions League. Photo: Backpagepix

Title-holders Wydad Casablanca from Morocco are among 58 clubs who have entered the 2022/23 CAF Champions League, with the qualifying rounds draw to be made in Cairo on Tuesday.

Originally set for Monday, a Confederation of African Football (CAF) statement said the event had been delayed 24 hours due to unexplained “technical reasons”.

The draws mark the start of a big week for African clubs as CAF president Patrice Motsepe is due to launch in Tanzania on Wednesday an African Super League, with the first edition planned for 2023.

Wydad were crowned African champions a third time in May, defeating record 10-time winners Al Ahly from Egypt 2-0 in the final in Casablanca.

The choice of the home ground of Wydad for the biggest club match in Africa sparked an angry reaction from Ahly, whose appeal to the Court of Arbitration for Sport (CAS) for a neutral venue was rejected.

Wydad and neighbours Raja Casablanca, Al Ahly and fellow Cairo club Zamalek, Esperance from Tunisia and Mzansi’s Mamelodi Sundowns will be among the favourites to pocket the $2.5 million first prize next June.

According to a CAF statement, Wydad, Raja, Al Ahly and Esperance will receive byes into the round of 32, along with TP Mazembe from the Democratic Republic of Congo and South Africa’s Mamelodi Sundowns.

Zamalek, however, must play in the preliminary round having performed surprisingly poorly in the last two editions after finishing runners-up to Al Ahly in 2020.

The preliminary round is scheduled for September and the round of 32 for October – both over two legs – and the 16 survivors advance to the group stage, which begins next February.

In addition to Mamelodi Sundowns, South Africa will be represented by Cape Town City FC in this season’s CAF Champions League.

The Citizens, however, will have to play in the preliminary round.