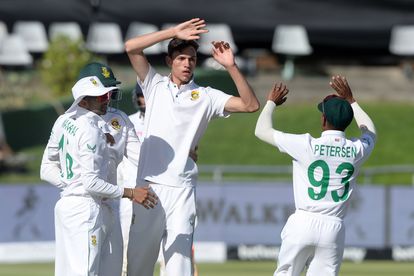 After two hard fought encounters, CSA could not have scheduled a more appropriate setting for the decider than Newlands. Photo: Ryan Wilkisky/BackpagePix

After two hard fought encounters, CSA could not have scheduled a more appropriate setting for the decider than Newlands. Photo: Ryan Wilkisky/BackpagePix

The natural inclination when a cricket fan lays eyes on a player is to try to connect them in some way to an established quality in the game but here we do Marco Jansen a disservice.

When that player is six-foot-plenty, South African and a fast bowler that established quality is Morne Morkel.

Morkel is a player whose numbers don’t necessarily bear out the impact he had on the field; nonetheless, Jansen has the potential to surpass the Proteas former resident longshanks.

Why Marco Jansen is such an exciting talent

Jansen is taller than Morkel by a good few inches and is reckoned as the tallest man to play Test cricket for South Africa.

Like Morkel he doesn’t try to bowl too quick, but creates awkward bounce and angles for batters to deal with.

It took Morkel years to find his feet at international level, but Jansen has settled into Test cricket like a natural.

Jansen’s worst spell of bowling in Test cricket was his first, but since then he appears to have improved each time he has been given the ball.

He has had to stand-in for more illustrious names in the South Africa setup, and exceeded expectations.

The one area where he might be overbilled is his batting, which has yet to deliver anything of note in international cricket.

However, with the Proteas currently sporting a long tail in Test cricket he is likely to get a few more chances to swing the willow.

Here it might be that the Proteas would prefer that he be a little more like Albie, and slightly less like Morne, who holds the record for the most ducks in Test cricket.

Jansen has also shown an ability to swing the ball when he pitches it up, something Morkel could never really manage with regularity.

The obvious distinguishing factor is that Jansen is a left-arm quick, which amplifies his awkward angles and the effect of the bounce he generates.

Jansen has shown that he has good control and is prepared to alter his line and length if plan A is not working.