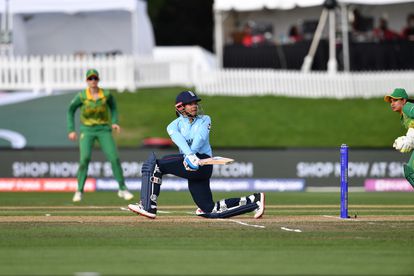 Opening the batting, Wyatt produced one of the most meaningful knocks over her life as she scored a superb century (129 off 125) to power England to a massive first innings total against the Proteas women.

In order to win Thursday’s World Cup semi-final, the Proteas will now need to chase down a challenging total of 294, and upon reflection, they will be desperately frustrated that they offered Wyatt five lives on the way to her century.

On no less than five occasions, Wyatt was dropped in the field, and although there were a couple of difficult chances, some were entirely regulation.

Nevertheless, it was a stunning knock, which came as England were reduced to 77/3 at one point in the 18th over.

South Africa were in a powerful position at that point, but then Wyatt combined with Sophia Dunkley, who scored a well-played half century, as England pushed on to a formidable total.

Just lat weekend, though, the Proteas wrapped up the round-robin stage with another thrilling win against India as they chased down 275, which was their second-highest successful run chase.

Earlier in the tournament, the Proteas also successfully chased down a total against England during their pool game, but on that occasion South Africa only needed to reach 236.

You can check out the full scoreboard here

South Africa’s results in the group stage of CWC22

EV technology and vehicles are almost ready for the SA market

Are Simz Ngema and Tino Chinyani back together?