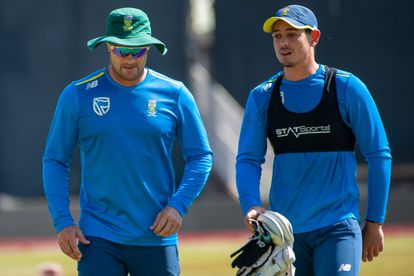 In one of the darkest days for South African cricket, the Proteas suffered a shock nine-wicket defeat to Bangladesh, and a 2-1 series loss on Wednesday.

After suffering that disappointment against Bangladesh, the Proteas are currently ninth on the Men’s Cricket World Cup Super League log with 49 points, one behind the West Indies and 11 behind seventh-placed Australia who have played four less games.

Australia have three ODIs against Pakistan next week to improve their position, while Pakistan are nine points behind South Africa, but also have four games in hand compared to South Africa.

In the World Cup qualifiers, the bottom five teams in the Super League – which is where the Proteas currently find themselves – will face three teams from League two (currently Oman, the UAE, and Scotland) and one each from Challenger League A (Canada) and League B (Uganda) to contest the two remaining spots.

The Super League engagements have to be completed by 30 May 2023, with the qualifiers scheduled for 18 June until 9 July in Zimbabwe

The Proteas are now facing the increasingly real prospect of having to successfully negotiate the qualification stage to book a berth in India, with Mark Boucher having lamented the struggles the team endured against Bangladesh on Wednesday.

“I just think we lacked intent,” said Boucher. “We got off to a very good start with Quinny (Quinton de Kock) and Janneman (Malan), and we just went to sleep.

“It’s certainly not the way we want to play. After a good start, we want to come in with a lot of intent and take the game forward, and we just didn’t do that.

“They bowled well, but I still think you’ve got to take some risks along the way to create some scoring opportunities, and we didn’t do that.

“It’s almost like we were going out with the fear of getting out instead of going out to score a total, which if you look at the way the wicket played was over 300.

“The intent just lacked, which spiralled into a collapse which was the end of us… We understand the matter of the points, but we also understand that we need to play some decent cricket, but I don’t think it’s because of the championship points.

“We were outplayed and we played some really poor cricket at some stages in this series.”

“The one positive I do believe in is that if we do rock up, stick to our game plans and play with confidence, we can beat anyone in the world,” Boucher said.

“We’ve shown that in the T20 World Cup and we basically have the same personnel in our ODI team, so we have a lot of things to talk about and discuss.

“We’ll do that, but we also know that we have clientele in our dressing room to beat the best teams in the world. We’ve beaten the best sides in the world before and we’ll have to beat them again to qualify for the World Cup.

“The alarm bells are there and we’re putting ourselves under pressure, but I guess we have to come to the party.”

Bangladesh had fielded an unchanged team for the third match in a row, and initially struggled to make inroads as South Africa reached 46 without loss. Yet, from there, the Proteas crumbled under the pressure asserted by a superb Bangladesh onslaught.

With Taskin Ahmed producing one of the all-time great Bangladesh bowling displays on South African soil, the fast bowler claimed stunning figures of 5-35, but he was ably supported by all the bowlers around him.

By contrast, the Proteas batsmen woefully lacked any application, with Janneman Malan’s score of 39 the only innings of substance as the home team crumbled to 154 all out after just 37 overs.

Bangladesh then waltz to the crease, and duly put the bowlers to the sword, with a stunning half century from Tamim Iqbal and well-played 48 from Litton Das leading them to a famous victory.

It is the first time Bangladesh have clinched an ODI series win in South Africa, and no one can say it wasn’t fully deserved.

By contrast, this has to go down as one of the most woeful ODI performances ever produced by a Proteas team.

“I have been playing for Bangladesh for more than 15 years. If we can win today it will be one of our biggest achievements,” said Bangladesh captain Tamim Iqbal prior to the match.

You can check out the full scorecard here