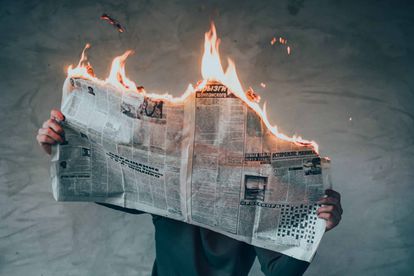 In October of 2016, the term “fake news” was almost unheard of. A month later, amidst a landmark US election, interest in the phrase quadrupled.

It has morphed from a throwaway expression, to a political tool, to 2017’s word of the year, and is now ubiquitous (especially in social media circles).

The dangers of fake news are known around the world. The World Health Organisation has called it an “infodemic” – an oversaturation of information that makes it difficult to distinguish between what is true and what is false. Recent studies are proving an infodemic, combined with a pandemic, is not just dangerous. It’s deadly.

Fake news is not a new phenomenon

Misinformation and distorted news go back centuries. In 1835, The Sun became a household name after publishing a six-part story claiming an alien civilisation lived on the moon. In the 1890s, a circulation war between Joseph Pulitzer and William Randolph Hearst popularised the use of sensational, exaggerated stories with catchy headlines to sell papers — known as “yellow journalism”.

The 21st century brand of yellow journalism, fake news, is fuelled by social media and the internet to create a misinformation machine spreading false stories further and faster than ever before.

History shows we are no strangers to misinformation, especially during global health crises. The fear and uncertainty surrounding pandemics creates the ideal habitat for fake news to settle in and call home.

This year is no different.

Misinformation and pandemics: a lethal combination

Medical misinformation has spread like wildfire, causing hospitalisations and deaths across the globe. A study published in The American Society of Tropical Medicine and Hygiene found approximately 800 people died and almost 6,000 were hospitalised in the first months of the year as a direct result of pandemic misinformation.

The study listed numerous examples of the damaging information spreading, many of which have resulted in death:

These cures are skilfully portrayed as credible through the use of industry language and manipulating sources.

Some claims have indirectly caused deaths or severe illness by contributing to the spread of the pandemic. Several doctored images claiming wearing a mask causes hypercapnia or hypoxia spread throughout social media, and one was shared over 100,000 times. False articles have claimed the pandemic is fabricated, or wildly overstated, causing complacency and distrust in credible news.

A vaccine won’t work if people don’t take it

In the months to come, as the world races to develop a vaccine, the threat of fake news could become deadlier.

A recent poll found 28% of Americans surveyed believe Bill Gates wants to use the vaccine to microchip people. Another popular theory argues the pandemic is a hoax invented as an excuse to vaccinate people by force.

For herd immunity to successfully prevent the spread of the disease, a high percentage of the population needs to be exposed or vaccinated. If a portion of the population refuses vaccination as a result of these fake news stories, annual outbreaks and intermittent localised lockdowns could become commonplace. Practices like wearing masks and social distancing could become a permanent part of everyday life for years to come.

Although small, researchers say the number of those who claim they won’t get the vaccine is high enough to prevent its effectiveness. Fake news is severely threatening the future of pandemic control.

Protecting yourself against fake news

The best way to protect yourself is to judge each piece of information critically and avoid spreading information you are unsure of:

• Who wrote it? Check whether the source of the information is credible and beware of false sites that mimic legitimate news organisations.
• Do not share based on a headline – read the full article and determine whether the information has enough supporting evidence.
• Look for a supporting, credible source that confirms the information.
• Check the date. Old articles or videos are often shared and presented as recent but may not be currently relevant.
• Is it satire? Research the website and author to determine whether the story is intended as a joke.

Understanding the consequences of fake news is vital in preventing its spread. To end the “infodemic”, be on the lookout for fake news and ensure you do not become a victim.