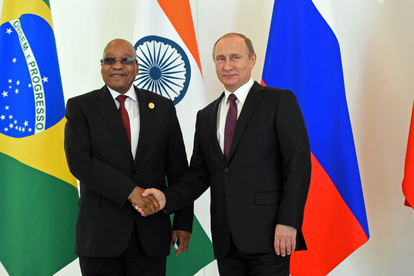 Former president Jacob Zuma has officially commented on the conflict between the Ukraine and Russia on Sunday evening.

In a statement issued by the Jacob Zuma Foundation, the ex-president expressed that he is exercising his constitutional right to expressing his opinion on the subject.

“As one of the elders in the movement who has devoted his whole life to the liberation of the people of South Africa and a committed member of the African National Congress, H.E President Zuma felt it would be remiss of him not to exercise his constitutionally enshrined freedom of expression and share his thoughts on the developments in Russia and Ukraine conflict.”

Zuma takes aim at the West

In line with this, Zuma’s opinion on the matter seems to heavily favour Russia to put it mildly. The former president dubbed western forces bullies, commenting that:

“Our Patron says that the current impasse between Russia and Ukraine must be seen within the context of, in the main, dynamics in the balance of forces on a global scale. This impasse has by default also exposed the hypocrisy of what has become the conventional wisdom, which always favours the western forces including their bullying tendencies and their insatiable appetite to dominate others whilst furthering their own agendas and interests.”

Furthermore, Zuma called for nations like Russia and China to be applauded for their efforts in defending their territories against these ‘bullies’.

Countries like Russia and China, thanks to their strong political and economic independence, have managed to defend their territories from these western bullies and must be applauded.

Russia has been ‘very patient’

Putin, in Zuma’s opinion, has been patient with the West in the days leading up to the conflict.

“His Excellency President Vladimir Putin has been very patient with the western forces. He has been crystal clear about his opposition of the eastern expansion of NATO into Ukraine, among other areas, and is on record about the military threat posed to Russia by the presence of these forces, if allowed to be on his door-step.”

Furthermore, Zuma questioned why NATO forces were allowed to ‘establish presence’ in the Ukraine.

“Surely, in terms of efforts to achieving world peace, the sovereignty of Ukraine and all the democratic dictates cannot mean allowing NATO to establish presence on its real estate, thus, establishing an untenable security risk to Russia. Ukraine and Russia are separated only by a line on the map and not by he Baltic Sea- Why is this complicated to understand?”

Evidently, Zuma seems to relate to the reason behind Russia’s invasion.

“If forces, globally known to be hostile to the United States of America, were known to be establishing presence of any sort in any of the adjacent territories within the USA, the USA would certainly act in a manner that it believes would neutralise such a perceived threat.