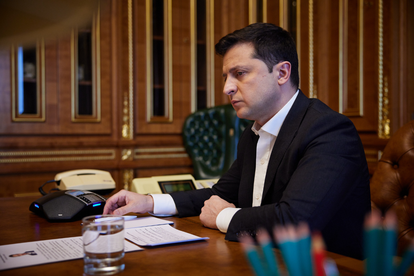 Ukraine President Volodymyr Kelensky has confirmed that another Russian missile strike has taken place on Sunday. In a clip posted to Kelensky’s official social media page, the President confirmed the attack at Vinnytsia. The attack saw 8 missiles directed at a local airport which has reportedly been completely destroyed.

Pressure mounts for action from the West

The Ukraine leader didn’t mince his words, calling upon the US and other Western powers to ensure that action is taken.

“We repeat everyday: “Close the sky over Ukraine!”. Close it for all Russian missiles, Russian combat aircraft, for all these terrorists. Make a humanitarian air zone. Without rockets, without air bombs. We are people and it is your humanitarian duty to protect us, protect people.”

Kelensky went as far as to chalk inaction up to approval of the attatcks on the country.

“And you can do it. If you do not do that, if you at least do no give us aircraft for us to be able to protect ourselves, there can be only one conclusion: You also want us to be slowly killed. This is also the responsibility of the world’s politicians, Western leaders. Today and forever.”

US officials are currently in talks with Poland to discuss a deal which would ultimately assist Ukraine with additional fighter jets.

Numerous reports indicate that the Ukrainian President encouraged the US and other member nations of NATO to assist with warplanes to help the country defend itself.

Four US officials told Politico that the country is considering a deal which would involve the US sending fighter jets to Poland. This is on the condition that Poland, in turn, provides Ukraine with used MiG-29s which are Soviet-era aircraft.