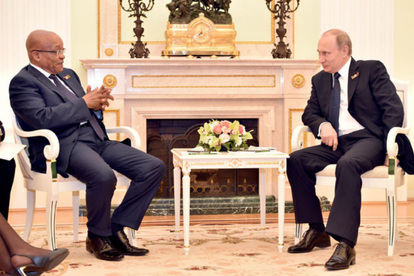 Former president Jacob Zuma has claimed that there is a ‘disguised attack’ on BRICS nations in recent days. The union includes Brazil, Russia, India, China and South Africa and Zuma highlighted his view that the group is under attack.

The ex-president had been commenting on the conflict between Russia and the Ukraine. In a statement released by the Jacob Zuma Foundation on Sunday evening, Zuma detailed why he felt that BRICS nations were being subjected to this ‘attack’.

” Recently, there was a disguised attack on some member countries of BRICS. In Brazil, a progressive government, under Her Excellency Former President Dilma Rousseff, was brought down under nefarious accusations of corruption. Her comrade, His Excellency Former President Lula da Silva was accused of corruption. He was arrested and convicted. Later he was released after it was discovered that the charges were all concocted. In whose interest was this done?”

Zuma claims he was part of attack on SA

Turning to South Africa in his explanation of this ‘attack’, Zuma claimed that the allegations levied against himself formed part of this alleged plot.

“Zuma was removed from office, before he finished his term, by the western forces using their forces that they are in control of within some structures of our government, and some that they control in the ruling party. He was subsequently unlawfully arrested ( as confirmed by no less than two constitutional court justices.”

Turning his attention to India, Zuma pointed to the Indian National Congress ‘which has widespread roots in the country’, losing elections.

As for China, Zuma claimed that the nation had managed to dodge an attack by credit ratings agencies.

“China was attacked by the credit rating agencies, but fortunately, China’s economic power is too big and successful, that the rating agencies failed to dent the Chinese economy and it’s standing globally.”

Russia in ‘cross hairs of the bullies’

Zuma claims that Russia is being subjected to this attack alongside other BRICS nations and that the Ukraine is being used as a ‘front’.

“Russia, a BRICS member country is now in the cross hairs of the bullies. Ukraine is being used basically as a front, so that Russia can be brought to its knees through unjustifiable sanctions. These facts as articulated above are important to be taken into consideration when the current impasse between Russia and Ukraine is being discussed and analysed. It is clear that without the insistence of western powers behind Ukraine, the impasse between Russia and the Ukraine could be resolved quickly and amicably.”