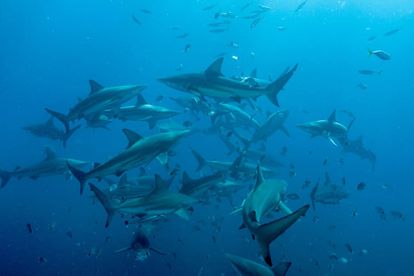 What started out as a typical day at Kalama Beach in Hawaii for six-year-old Anela Rezentes and her mother quickly turned scary on Sunday.

The girl was playing in the surf when suddenly out of nowhere a shark appeared behind her. Her mom who was on the beach at the time, caught the whole experience on video.

The young girl told Khon2 News that it’s a moment she would never forget. In the video, six-year-old Anela is splashing in the water waiting for the next wave when suddenly a fin appears. The shark can be seen splashing around the six-year-old.

“My soul left my body. I saw a shark. I didn’t notice he was behind my back. So, I really wanted to run out. I was really scared,” Anela told the publication.

Her mother Sheri Gouveia who filmed the ordeal said her daughter came screaming out of the water.

“By the time she came out of the water, she was hysterical. I was like oh my gosh. I didn’t realize it was actually a shark. That’s what shocked me,” the mother told Khon2.

IT HAS BEEN IDENTIFIED AS A BLACKTIP

Experts told Khon2, based on the video it appears it was a blacktip shark. The species reportedly feeds on fish and routinely look for food in shallow waters.

Dr Ryan Orgera, CEO of Sanibel-Captiva Conservation Foundation, told ABC7 the reason sharks get close to shore is to most likely follow their prey.

“Sharks being near is a sign of a healthy ecosystem but that fact may make some fearful to go in the water. Sharks are not there because of swimmers, surfers or fishermen, they live there, they’ve been there for millions of years,” he told ABC7.