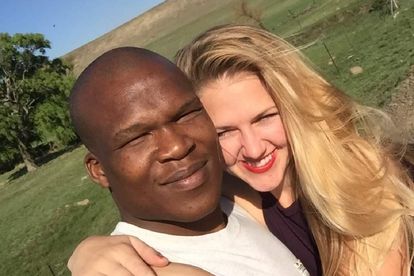 Lindsay Myeni, the widow of slain KZN rugby player Lindani Myeni, has pleaded with the South African government to give her citizenship – citing fears about the safety of her children if they stay in the US.

The 29-year-old victim was shot dead by police last month, who suspected him of breaking and entering. However, bodycam footage from the incident shows a particularly brutal response by the cops in Hawaii. Lindsay is now embroiled in a legal battle with the Honolulu Police Department – but has her eyes on a long-term future in South Africa.

Mrs Lindsay Myeni addressing the media after the memorial service of her husband #LindaniMyeni pic.twitter.com/8iQfemCsYe

Mrs Myeni has been flown over alongside the repatriated body of her husband this week. While attending his memorial, Lindsay made it clear that she does now want to stay in America with ‘children who are considered black’. After several recent high-profile killings of African-Americans by police officers, the Myenis see South Africa as a safer location:

“My next steps, honestly, I need help from the SA government to get me citizenship so I can stay in my children’s home country without my husband. People think when you are married citizenship to each other’s countries is automatic but it takes five years each side.”

“We’ve always wanted the flexibility to be in whichever country the kids can prosper most and right now I feel like this is the safest country for them. I don’t want to raise kids that are considered black in America, where it’s clearly not safe.”

KZN Premier Sihle Zikalala also attended the service, offering his deepest condolences to the Myeni family. He remains utterly unsatisfied by the police response to Lindani’s death – and wants the biggest names in US politics to intervene:

“We pin our hopes on US President, Joe Biden, that his intervention might help the wheels of justice to turn with speed. We also pray for former US president Barack Obama’s mediation, who hails from Hawaii, in bringing the killers of Lindani to book. Lindani Myeni is one of our own and his life matters dearly to his family and to us as his nation.” | Sihle Zikalala