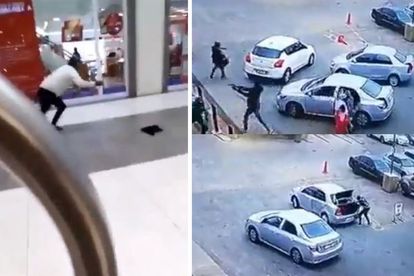 The terrifying moment when a gang of 15 armed robbers stormed the Lakeside Mall in Benoni on Wednesday was caught on camera.

WATCH AS A TERRIFIED WOMAN WITNESSES THE ROBBERY

The robbery took place around midday on Wednesday.

In the first video shared on social media several men are seen running in the mall while gunshots can be heard. The voice of a terrified woman is heard as she witnesses the robbery and shooting unfold in front of her eyes.

According to police spokesperson Captain Nomsa Sekele, 15 armed men stormed the store just after 12:00. They took merchandise and demanded money.

“A shoot-out ensued between security personnel and the suspects, but no injuries were reported,” said Sekele.

But paramedics reported two injured people on the scene.

TWO PEOPLE WERE INJURED IN THE ROBBERY

“ER24 and Life Healthcare arrived on the scene to find the SAPS and security members already in attendance.

Meiring said both patients were treated and transported to a private hospital for further care.