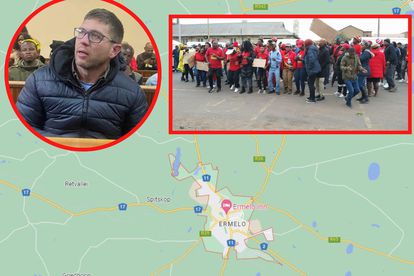 The Ermelo farmer accused of MOWING DOWN two children with his bakkie and assaulting another will appear in court on Friday for his formal bail application. The 41-year-old farmer, Louis Johannes Grobler appeared in court on Wednesday and was remanded back in police custody.

THE ERMELO FARMER CASE HAS SPARKED TENSION IN THE COMMUNITY

Family members of the children along with EFF and ANC members protested outside the Ermelo Magistrate’s Court.

The third child was allegedly slapped by the farmer.

ONE CHILD SUFFERED A BROKEN LEG

A parent of one of the children spoke to the media outside court saying his child is fighting for her life in hospital and that he will insist that the farmer is denied bail.

“Last Friday, the children went to look for corn to feed the chickens. The farmer was done with farming for the day. He drove towards them and knocked them over with his car. I was at work when I was informed. I went to check on the child and she was badly hurt.

“As the family, we are hurt. Even during the last court appearance, one of the white farmers who I work for called me while I was in court to tell me that I was fired. We are hurt as a family because of these things that are happening.”

THE FARMER ALLEGEDLY MOWED THEM DOWN WITH HIS BAKKIE

According to police spokesperson Colonel Donald Mdhluli, the farmer is facing two counts of attempted murder as well as an assault with intent to cause grievous bodily harm.

“The farmer allegedly ran over the two minors and thereafter assaulted the third one after accusing them of theft. The incident is said to have occurred on Friday, 15 July 2022 around 14h00 at a certain farm in Ermelo. The matter was then reported to the police and after an investigation was done the man was immediately arrested the same afternoon.”

He furthermore said the farmer reportedly had his first court appearance on Monday, 18 July 2022 where the matter was postponed to Wednesday for a formal bail application.

Meanwhile, the Mpumalanga MEC for Community Safety, Security and Liaison, Vusi Shongwe, has condemned in the strongest possible terms, the incident.

THE INCIDENT HAS BEEN CONDEMNED

“If the court finds the suspect guilty, he must receive the maximum allowable sentence equivalent to the offenses committed. This will serve as a deterrent to other farmers not to infringe on the rights of workers and dwellers alike in farming communities. We should therefore allow the process to unfold and the case will be closely monitored.”

Shongwe urged community members who may have information regarding the matter to come forward and assist the police.

He has further called for calm in communities while the matter is being processed in court.

WATCH AS FAMILY MEMBERS OF THE CHILDREN SPEAK OUT