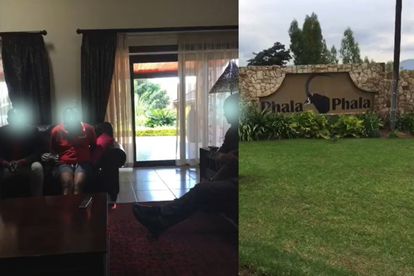 The EFF released a video and slide show of the alleged suspects. Photo: Screenshot from video.

The EFF released a video and slide show of the alleged suspects. Photo: Screenshot from video.

EFF leader Julius Malema called on Ramaphosa to step aside with immediate effect to allow the authorities to properly investigate the matter.

EFF BRING OUT THE FILES AT RAMAPHOSA ROBBERY PRESSER

Former spy boss Arthur Fraser laid criminal charges against Ramaphosa last week. He alleged that the President was robbed of more than $4 million in February 2020 and failed to report the crime.

He further accused Ramaphosa of defeating the ends of justice, kidnapping suspects, interrogating them on his property and bribery.

Ramaphosa confirmed the robbery but denied criminal conduct – on his part – on multiple occasions. He has also not confirmed the amount of money stole but said it was the proceeds of game sales.

Malema promised to release footage of the alleged robbery after the news broke and he kept his word at the presser on Tuesday, 7 June.

The EFF released a four-minute video that allegedly shows the burglary. Two masked men sneak around the Phala Phala property – shifting cameras before entering the property and lifting a mattress – where the money was reportedly kept.

The country’s second-largest opposition party also released a slideshow that allegedly shows the detainment of the robbery suspects, their identity documents and photographs of the vehicles supposedly purchased with the stolen money.

“It is not surprising that R60 million in dollar bills were stolen from Cyril Ramaphosa’s property and was not reported to the South African Police Services because criminals do not report crimes when their proceeds of crime are stolen,” said Malema.

The EFF submitted a list of parliamentary questions to Ramaphosa about the robbery which they want to be answered within 10 days as per the National Assembly’s rules.

The party said if Ramaphosa refuses to step aside to allow an open and transparent investigation it will mobilise many sectors of society to stop recognising him as the President of South Africa and will not permit him to perform any presidential functions.