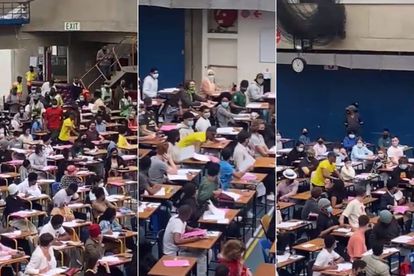 UCT has beefed up its security following the disruption of mid-year exams on Monday, 6 June. Photo: @GhalebCachalia / Twitter

UCT has beefed up its security following the disruption of mid-year exams on Monday, 6 June. Photo: @GhalebCachalia / Twitter

The University of Cape Town (UCT) has responded to the disruption of exams that were benign written on Monday, 6 June. The university said a group of individuals who are neither employees nor students disrupted the exams.

UCT condemned the actions of the individuals, stating that it was an infringement on the rights of students to “sit their mid-year exams in a conducive environment”. It confirmed that exam scripts of students who were being supported by UCT’s disability services were torn up.

The University stated that the disruption was not a legitimate protest. It confirmed that it had called the South African Police Services (SAPS) to the campus. UCT also laid charges of trespassing and malicious damage to property against the individuals.

One arrest was made on Monday, 6 June.

On the topic of the exams, the students whose exams were disrupted will be informed about re-sit times, including arrangements for those with particular support needs for completing their exams at UCT.

The campus was secured following the disruption

The Campus Protections Services (CPS) secured all exam venues on the upper campus on Monday 6 June. This ensured that all scheduled papers for the remainder of the day proceeded as planned.

UCT stated that it is on a heightened alert for any trespassers who attempt to gain access to the campus with ill intent. It further stated that it has been in contact with the Groote Schuur Community Improvement District NPC (GSCID).

This will ensure that they continue with their designated mandate of providing safety and security in the public spaces and areas surrounding the University of Cape Town.

“The extent of the stress and pain from Monday’s actions is deeply distressing for all of us. We all acknowledge that writing exams can be a stressful and for this to have happened caused further unnecessary and unacceptable anxiety. The behaviour demonstrated on Monday is not befitting of a university environment, which is a space for rational engagement, robust if necessary, but always civil and respectful of the rights of all,”