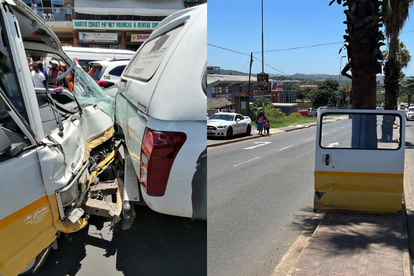 Eleven people were injured in an accident in Verula CBD, KwaZulu-Natal. Images: RUSA.

Eleven people were injured in an accident in Verula CBD, KwaZulu-Natal. Images: RUSA.

Eleven people, including two children aged four and 13, were injured while a woman was ejected in a collision after the brakes on the minibus taxi they were travelling in failed in Verulam, KwaZulu-Natal.

The accident happened in the Verulam central business district on Wednesday, 30 November.

According to private security, Reaction Unit South Africa (RUSA), one of their members was on patrol on Ireland Street at approximately 11:58 when he witnessed the Toyota Hiace travelling at a high rate of speed down the steep road.

The sliding door reportedly ripped off the vehicle, which led to a female passenger being ejected from the taxi. The car continued travelling downhill for a further 200 metres before it collided with a white Isuzu bakkie.

“RUSA medics were dispatched to the scene and treated seven people for moderate injuries. The remaining passengers and the driver sustained minor injuries. They were transported privately to a hospital. According to the driver, the brakes on his vehicle failed,” Balram said.